We’d heard chainsaws going on the hills around us, but it took a couple of days to realsie they were clearing a band of tree on the hill to the North  of our flat.  For nearly two weeks, it was saw, saw, then maybe the sound of metal wedges being hammered in, another pause, a whistle (no ‘Timberrrrrrrrrrrrrr! here) then a crash as the trees hit the ground.  Then the heavy machinery came and they installed a metal lift to bring the trees down and the harvester that strips the branches and cuts the logs to size.  A huge gash appeared in the hill from the trees and of course the missing trees on the hill. Part of life here, part of wood being carbon neutral, but it wont be pretty again for years! 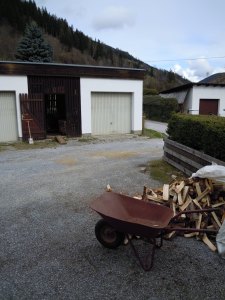 Heap to wheelbarrow to shed

We burnt so much of the stuff this winter that we had to order more, first time we’ve been caught out.  However much work the wood is, I wouldn’t be without our wood stove in the living room and my old wood cooker in the kitchen – I’d much rather burn the food on this than anything else! For all you eco-warriors, this is carbon neutral as its from a managed, replanted wood!

Stacking the wood, had me pondering on Austria and its wood. I think the country runs on it – well most houses are built from it, a lot are heated, and its a major industry, as someone said, our first class wood goes to make poor quality furniture for Ikea.  We get a mixture of  Pine, Ash, Willow and Birch, there’s very little Oak or Beech here at this altitude. Most of the woods are managed and all our owned and form some of a family’s wealth.  The amount of wood you had stacked outside was seen as an indicator of your wealth, we even see it now where it’s beautifully lined up outside someones house but has been there so long, it’s all grey and rotting – there must be a parable in that! One of the houses we looked at in Rauris, we were told the tale of how an old woman had lived there, but in the middle of winter her nephew saw the windows were all frozen – she had no money for wood and was ashamed to ask for help.

From shed to kitchen to stove!

It’s so managed here, every branch is owned and the more responsible owners replant straight away after felling.  There was a huge storm here in 2006 and there are places on the hills where all the trees went, and most have been left to re-generate, but apparently if this has not happened in ten years they have to replant.  The trees are cut into metre lengths and then stacked for a year, then cut into smaller lengths and either sold or re-stacked and dried more.  We buy ours from a local farmer  as ‘fertig’ in that its in little bits, dried and ready.  He delivers that to us, dumps it in a heap and we have to then re-stack inside, or some do it outside with a cover. Then we have to carry it indoors.  It must be the most handled and expensive fuel in the world when you consider how much carrying of the stuff  and waiting for it to dry goes on before you can burn it.

I’ve certainly not got the Austrian wood stacking preliminary certificate yet,but I’m getting there!

Fruit cage fence peering out of the snow!

The small Ice age seems to have passed, although that’s relative of course!  We still only have +2 or 3 in the day, and up to -10 at night. it snowed on Monday but the snow Linda just had to shovel was melted by the end of the day!  However, there’s a feeling of spring in the air as the birds have started to sing in the garden. The Blackbird has returned and I’ve just seen the first Greenfinch.  I’m officially jealous of Paggy  who has had the first Bullfinch  visit his table.  It’s surprising how soft the air feels too, the lack of cold filling it with some mild scent that I cannot pinpoint. In fact its a couple of days since I wrote this, and last night it RAINED, and its +8, not normal and far too early for a thaw. Saying that, snow is forecast at the weekend, but we’ve so much water lying about, it’ll turn into an ice-rink here when it freezes again!

My main problem is that I’m now feeling permanently hot!  The sudden change makes the house feel too warm although we’re heating it less.  Maybe the body needs to catch up.  Maybe our supply of wood will last,  Linda said she has burnt lots more this year too  For you eco-friendly peeps, our wood is carbon neutral as it is grown locally by a  farmer and replanted as soon as it is felled! It’s mainly  pine with alder and sycamore, all of which are local, no oak or beech here though -its too cold although I have seen a couple of oaks in people’s gardens.

Yet the snow is still up to the top of our fruit bed fences, that’ll take some while to thaw.  I’m sat writing this having had one of my sponge bob days, for the past two weeks I’ve been constantly on the go and I knew I had to bale out for a day, I was exhausted.  So I’ve sat and written, loaded more samples onto my Kindle – I’ve over 70 now, where will I find the cash to buy them all????  Still at least they’re free!  I get to see the Thyroid doctor again in two weeks, this permanent exhaustion is getting me really down.  Yes, Andrew Wommack fans I’ve rebuked, commanded and cussed it, and it still comes back.  Maybe its disbelief!   Does anyone else when they are tired, they  just want a day of completer silence and isolation, no one in their body space, time to think pray and read and recharge their batteries?