Dave and I have been really praying about our future here in Austria and after the events of the past couple of days, I’m begining to wonder if things such as the meeting with the Priest and yesterday’s bizarre afternoon are some form of answer!

In the morning, I had a call from our Pastor, saying he’d had a mysterious phone call from a man in English a few weeks ago and he had arranged to meet him at the Burg at Three in the afternoon. He had no idea what it was for, there was something to do with a warzone and he couldn’t ring the bloke back.  He couldn’t attend anyway as he had to teach that afternoon. So Dave came along to ride shotgun in case it was a depressed asylum seeker from the local centre. We prayed before we went in, maybe God did have his hand on it…

I went to reception and met an familiar face from when I worked there who informed me the mystery man was getting married there that afternoon. We went up to the Chapel where we met his parents who sent someone off to find the groom. They were waiting for our Pastor to come and do a Wedding Blessing or Ceremony, – they had been married civilly earlier as you have to do in Austria. My blood ran cold. The poor bloke who looked shell shocked.

So I rang the Pastor who exploded down the phone. I can’t do weddings without the right paperwork, I’ll end up in Prison, this guy should have sent me all the forms. He wouldn’t/couldn’t even come to do a blessing. All I got was a tirade of how nothing was going to happen, he even said at one stage I could do a blessing myself.

More discussions. Dave and I went down the hill to the Priest’s house. He was a surprised as us. He had been rung by the bloke, but as he wasn’t Catholic there was nothing he could do, nor was he even ready to go and give a blessing. He and given the groom our Pastor’s number. Back to square One. Then I rang Heidi who is one of the lay preachers and is a human dynamo. She agreed at once to come and do a blessing but wouldn’t make it till six. The wedding party took it well, and were taking photos and chilling while they waited. We had to leave as we had another appointment but Heidi rang later and said she did a lovely little service in a candle lit chapel, using English and German. Phew.

And our Pastor? Another phone call spewing the same stuff, not a word of Oh B’*§$% I’ve screwed up big time, I didn’t understand. No, Just this cant be done, its not the law I can’t come. Maybe something has happened to him in the past where he cant own up to stuff, I don’t know. But at least Dave and I were there and by God’s Grace it was sorted. The only thing I regret is that the couple lived in the same part of the world as Andrew Wommack and I wanted to ask if they knew of him………

I don’t do descent, descending or even going down a little slope such as this. Which is why the  Cross country skis are in the loft, and this year, we’re going to use the snow shoes. Isn’t this more lovely than a prepared track?

But I could always make a descent through a hole in the snow!

We had a new Mayor elected in Ramingstein this spring, which necessitated a big party and procession in the autumn. This tradition is unique to Ramingstein and dates back to the Slovenian times. A cupboard is kept in the mayors house filled with good wishes and certificates but this must be given to the new Mayor. Also the mayor has three horseshoes nailed to his feet, representing I don’t know what, and then the procession goes to the new Mayor’s house where speeches or songs are given. It all has a strict order with the coaches and  there has to be a wedding party. Not always possible so this year the Catholic Woman dressed up to represent it!  I was with the Tracthenfrauen as a bee-I can now reveal!  This is because the new Mayor is a bee keeper. We leant a song and a play and early on the Saturday morning we put on makeup and costumes and got on the float. Off to Ramingstein where all the float lined up, then to Kendlbruck where we had a long wait to do our play – the stupid song still haunts me! After our play we were given a crate of beer which we drank as we went again to Ramingstein for the final speeches and then back to Kendlebruck for a meal and a singsong and by 9.30 I was finished!

And in-between? Meeting new people, chatting, laughter  as we recognised friends in other daft costumes. An amazing day, but I just hope he gets re-elected again in five years!!! 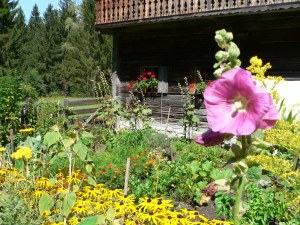 I’ve been really trying to get myself back into the swing of things here,despite my doubt over our future here. I must be wholehearted or it will of course fail. So, having missed all the outings of the Trachtenfrauen, I got in contact and joined them for a meeting about the coming up inaugration of our new Mayor. The ceremony is indivivual to Ramingstein, although it echoes the Tamsweg Verein(Club) inauagration, in that there will be a parade and little plays about the life of the Mayor. It will start from his house in Kendlbruck and go on foot to the Gemeinde building in Ramingstein. Apparently, something else unique is a chest which is placed in there for people to post ideas -good and bad.  The theme the group has chosen remains top secret as I write, there will be ten groups and none know what the other is doing!!!

I took off on a wet and windy night with three other ladies right up into an alm farm house in a remote part of the area. The meeting was great, I got my cossy sorted, learnt the song and enjoyed some really good zirben schapps.

This is all a long winded way into what I want to talk about!  The farm was really old, with its own Troad kasten and we were led into a hall full of boots and coats and a farmy atmosphere. We went into what must be the guest Stuberl, a large room with a Kachelofen and a table with fixed seats around it- I was itching for my camera. On the walls were photos of the family, sewn tablecloths, and the Crucifix, along with solid wooden furniture. A musical, shooting family, I could see from the shields and instruments in the room, And so much clutter, one whole cabinet filled with gifts, and knickknacks just tumbled in on each other. The room had a frieze around the edge and white walls.

It was a mix of old and new, traditional and modern and a living family, just what I would expect from a modern farming family. Having only ever been in the farm museums, it was a real insight. Outside was a bit too tidy for an old farm -the yard outside was grassed rather than mud and the buildings all mended and looked after. I was also a bit jealous. But here am I after seven years here, still being amazed at my experiences, as an outside and it always being a bit new -hope it lasts. What also strong me was the longevetity, the family living there all their lives, the constancy, and to me I feel that so restrictive- all that time in one place, not for me!

And it was a bizarre time, here was I in an old farmhouse half way up a mountain in the pouring rain, sipping schnapps and singing songs and dancing with twenty odd women dressed in various stages of costumes as…..tell you later!