In Tamsweg, Shloss Kuenburg is being done up, its been tatty for years, so being ever nosey I took this shot with the iphone through the window. Shame the iphone couldn’t handle the exposure at the end where all the guys were working, but I liked the curves!

Its been such a busy summer, that we haven’t had the time or energy to get up into them thar hills at all. 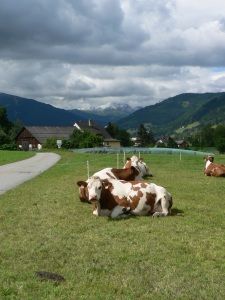 But I did do a wonderful walk from St Micheal to Tamsweg  with Karen.

It was just after one of the summer’s downpours, and there was snow on the tops. Perfect walking weather. 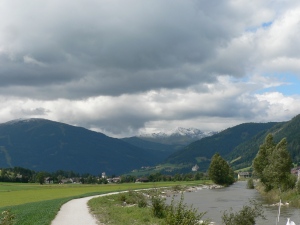 It was 11 miles but I so enjoyed it, Swingle did too, and then she wasn’t even tired when we got back! And I found some cows!

The annual pet show took place in Tamsweg recently and I trotted along. Well organised and happy animals. Made me almost want to have a Guinea pig again. It was interesting how the animals palled up. One Ginea pig seemed to be sleeping through the whole thing! 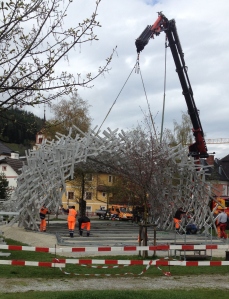 This certainly had the council guys matching edges and looking for right fits. The modern meets deeply traditional Austria. This Installation, named,’White noise’ is here for the summer to celebrate 40 years of  Lungau culture, with lots of events taking place in it all summer. Interesting! 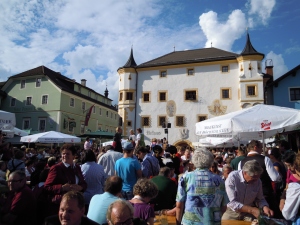 The sun was shining and the skies cleared and we were off to the Bauernherbst opening in Tamsweg.  This is a new festival at the end of the holiday season mainly for tourists but under the guise of ‘it’s the farmers’.  I’ve been told that most farmers aren’t even allowed to sell their products in a fair, so it’s just the money on beer and sausages!  Still we arrived in good time to check out the ‘Old Timer’ tractors and stalls.

We ate lunch in a surprisingly quiet restaurant and then met up with some of the  Lungau English gang (Lungish? Engauers?  Lungengs? ) and went off for the parade.

The tour was relatively short and the head was caught up with the tail as they went a second time around!  It was the usual guys of the Samsons,

Trachtenfrauen (I wasn’t allowed to go as I don’t have a real Lungau Dirndl!) , 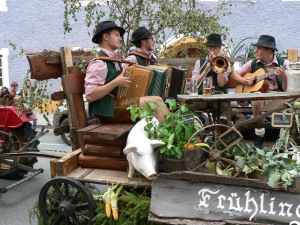 The clicker group was there, which has me a bit twitched these days.  These are the guys with the bullwhips who crack them sat on a horse. These shots are from another festival. 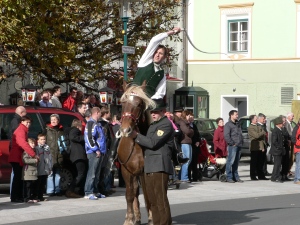 Health and Safety would have to be put in rehab, seeing this lot flinging the rope about in the middle of crowds and narrow streets,  Technically the whip should be way above heads, but it doesn’t feel like that and a couple of years ago, with one horse deciding to prance about, I was cowering in fear of my life!

I suppose the guys can’t be concentrating on what’s going on but trusting who is leading the horse to judge.  Still this time something went amiss and one bloke ended up with the rope around his neck.  He was more annoyed than injured thankfully. We saw the next night on tv another festival where the men stood on the horses……………..

After this the gang retired to the beer benches and were on beer, schnapps and Radlers (shandy), sausage and rolls, and HasenÖrl, envelopes of pastry with sauerkraut.  There were also chips made from the local spuds (Eachtling). 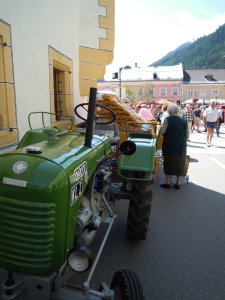 Despite the drought, there were plenty on sale but they were sold out by about 4 oclock!  So  a great time was had by all and we trotted home tired!  Somehting that always concerns Dave and I about these things is the old integration thingey.   If we go on our own, we don’t rally chat a lot with other people.  If we are with the Engauers, we form a group and its great, but we’re not really mixing except when we’re buying schnapps. So we’re standing out of the crowd like tourists.  But I enjoyed myself today and I’ve come to feel stuff the whole thing!  If I’m happy, it doesn’t matter.  We’re never going to be more integrated than we are now and this is the balance between the two, the best of both worlds.  Other times we’re with local friends other times with the gang. We win both ways!  We’re never going to be Austrian and maybe just like in an English community it will take a lifetime to be so.  So life here can combine the best of both.

A  whole new walk around Tamsweg that takes a whole day, I was sceptical! It uses older footpaths and joins them up.  However, Dave and I walked a stretch and it’s actually very interesting, as it takes you on foot to places you wouldn’t usually visit.  Part of the Witch trail covers it and the kids part has  pigs and sheep and horses and a Lungau Farm playhouse.  We saw loads of mushrooms, it being July but the Eier Schwammerl ahd been picked by the local mafia!  I got some lovely shots of farms too – working life goes on.  Do enjoy the slide show!