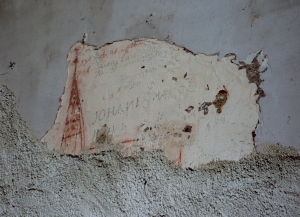 Out on a recent photo session in October, we visited out local church in Tamsweg, which has been partially restored. There is a little side chapel which is being done. On it was a patch of graffiti , with a picture of the church dated 1709, but probably meant in all honesty and worship, I wonder if more can be revealed?

Well, I’ve been out of work since I finished the English teaching, and have had the most wonderful summer, as I’ve wittered on previously. I really have had enough of trying for jobs and getting it wrong.  So I said to God, no more.  If you want me to work, let the work be sent to me.  I will be obedient when the Job centre send things and I must apply, but beyond that, I am enjoying home life!

Last week I get a call from the Volkshochschule asking me for ideas for a couple of evening classes, so I went in and met a lovely lady, threw ideas about and left it with her.  Complete peace. God has totally healed me from all the pain and damage of the course I taught.

This morning I had a call from the company who I taught English through this summer. Grovelling. Asking me back. Boy, they must have been desperate. Dave and I prayed about it.  I really was gobsmacked. But my heart was lifted. Ideas are bombing around my head. It couldn’t be any worse than last time.  This time I will do it in HIS strength. Maybe last time was a teaching  for me.  I had been saying to God, how I would rather be teaching with passion about him than anything else.  Then he reminded how I felt I was serving him when I taught riding.  Serving others and blessing him.  We have a new House church staring in our house this autumn. I have permission from the PCC to begin investigating finding rooms for the Protestant church in Tamsweg.

Astonished!  I start on Monday.

On our recent walk around Göbendorf and Pichl, we found a brand new Weather Cross. These are erected to ask for a blessing on the crops and farms (no comment on daft Catholic beliefs here!).  We saw another in the distance, they all seem to be on the Mariapfarr side of the Lungau.

They are very symbolic and traditionally carry the following symbols, Hammer, pincers, nails, the lance, spear with a sponge (we did think it a sausage at first), ladder, dice, the cockerel, the bleeding heart, the chalice, the bag with the 30 silver coins, with the spears in the shape of Christ‘s arms. This one didn’t seem to have the bag, but instead the face of Christ on a cloth which we read as his garments which were gambled for.  At least no one here in Austria would ever think of suggesting it was in any way offensive, not like in  some stupidly politically correct countries……….. 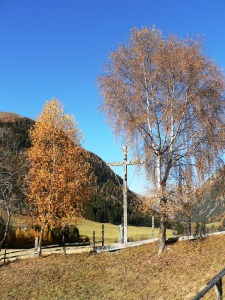 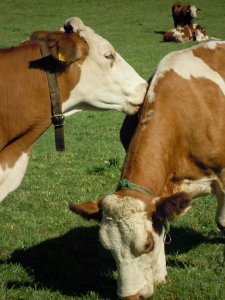 Ok, I’m cheating a bit here, but all the Flekvieh cows in Lungau are brown and white! 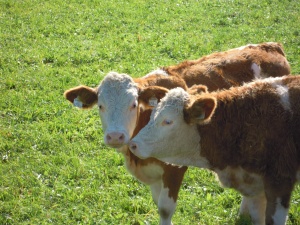 But there’s far more of them than horses so I tend to photo them quite a lot. 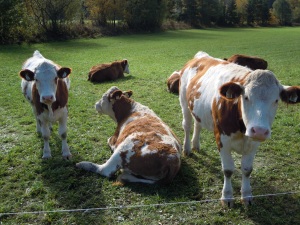 This lot were lined up in the field like children’s toys! 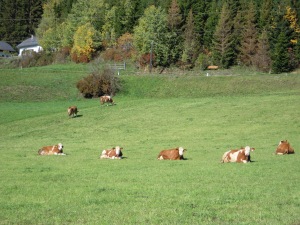 Lovely gentle natures and the sound of the cow bells are the most fantastic thing……..so why do I love them and hate windchimes??????? 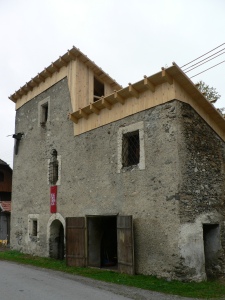 This annual event always brings up something exciting to look at in Lungau and this year was no exception. 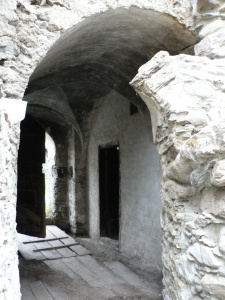 The origins of this building have been lost in time, except that it was built as a medieval tower.

Arch uncovered by the excavations when the walls were repaired.

Over the past two winters much had fallen down so this year some much need restoration has taken place – the owner said that the stairs were hanging in mid air before they were given a new wall.

It was used as a farm house in living memory and there were many reminders lying about the place as we went about.

It was also burnt at one stage, the charred ceilings till remaining.

There was some idea that it dated back to the Roman times,the village was apparently once called Grave village but no evidence has been found by the archaeologists who did a recent survey and some test digs.

Much of it was robbed out to build the local farms, and on the side by the river, apparently the ground is filled with the left over rubble.

There may be a cellar or another room at a lower level here.

Now Dave and I had our Time Team hats on and had a quick trot around the village and think we know what the origins of this wonderful building are, but we need to go and take photos to plead our case.  What do you think it’s origins are? 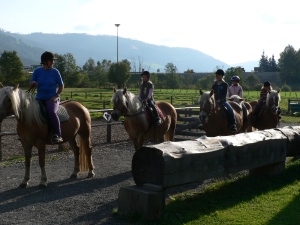 This short sentence leapt out of the page to me when I was about to begin my first job teaching riding here in the Lungau.  Each time I set out on a ride, I would check everything, didn’t rush (as I am prone), was carefull and calm but happy.   Result, in the entire summer I never had one child fall off, and didn’t myself, we had fun in every lesson and I think the horses responded to my quietness in being completely trustworthy.  When I moved on to another stables, this verse didn’t come to me naturally, my nerves after 14 months were on the rise, and it led to me leaving.  I had the occasional kid tumble, but no major accidents. Was I moving out of God’s will or just getting above myself.  I don’t know, but this verse helped me so much!