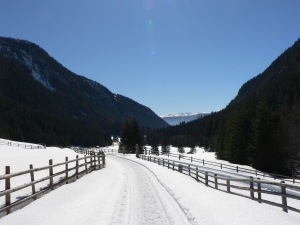 Having blogged this in November, and in the hope that spring really is not far away, it’s time to see how this forecast went!

There’s a local man, Horst Noebl -well in the Pinzgau region of Salzburgerland who has made some pretty accurate predictions of the weather.  We’re in the same county so it should apply!

Its going to be a snow rich winter, worse (that depends on your outlook) than last year. Not really. It wasn’t snow rich until the middle of January.  The resorts had enough and at the right time, but not ample amounts.  We had ten days with no snow at all on the ground in January and even went walking up in the usually inpenetrable hills!

The rest of November will be changeable with lots of precipitation. For the mountains there will be a good covering of snow. However it is likely these in December will melt and before Christmas it will be unusually warm. Before Christmas, the cold and new snow will also arrive in the lower lands.  But it is also possible that it wont arrive here until after Christmas (that’s hedging your bets)! Right! So Right! ‘cept the melt lasted until the middle of January.

January will be very cold, to -20, but with little snowfall.Wrong, was when it really began to snow properly.  It wasn’t that cold, it was relatively mild, to -10! There was quite a phase when the snow was just too gripping for good skiing.

February and the first part of March will be the time for heavy snow fall. The Easter holidays will be great for skiing.  Right, but it’s now the beginning of April and it’s still snowing, although it melts quite quickly.  What this guy didn’t see was the slipping of the Jet stream to the south, which has delayed spring, caused floods in southern Europe and extra snow, a delayed spring. 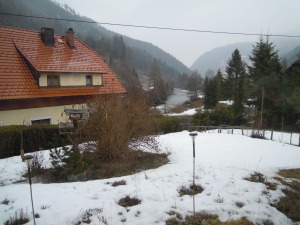 I’m sat here, feeling exhausted and really stiff after my trek into Germany.  Since I’ve been away, there’s been a major thaw, I can’t believe that my garden which was under a good two feet of snow now is only half covered.  The first thing I noticed when I got out the car was the sound of the waterfall.  Muted by the ice and lack of water, it’s now roaring and brown as the water escapes the valley.

We made the news twice while I was away you can see thus clip above until Friday. The first night when the Firebrigade had to pump out properties in Tamsweg, including where Dave works, and lay sand bags. The snow was melting so fast but the ice was still blocking all the rivers and drains.  The next day, Madling made it too.  On the hill above us where in 2007 we had landslides, the earth was starting to wash down the hill which could lead to the same result, so again the Fireman were clearing the streams  down to the Thomotalerbach.  Now today its raining. I can hear the rain on our metal windowsills, which I love hearing when I’m warm and sat indoors!  Hopefully that means its snowing higher up, but there are avalanche warnings galore and someones been killed in one in Obertauern.

I’m really quite sad that it’s all disappearing so rapidly, I’ve really got into the snow this year!  Perhaps we’ve lost the snow  because its taken itself to other parts of the world instead – see articles!