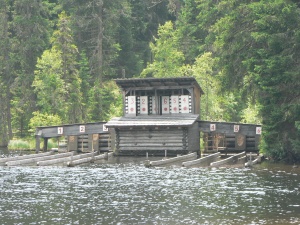 One of the local customs takes place on the lake Preber.  It claims to be the only place in Austria that does it, but I understand they do it just over the hill in a valley in Karinthia too.  Apparently someone was shooting a deer and by accident, the bullet hit the water but still killed the deer. So now there is an annual competiton where you have to shoot at the refection of the target in the water and your bullet will hit the real one.  Must go and have a go this August!!!

Obertauern, the ski lifts spoil it a bit for me, some people are never satisfied

Of course, we’re spoilt here with the scenery, castles, steam trains, Alm huts,  cycle trails……….but wherever you live you always take it for granted.  So when Dave and I boarded the bus to take us to Salzburg a few weeks ago, I began to get my holiday excitement.  We were going to meet the family and pick up a hire car at Salzburg airport, hence this journey.

It was during the baking hot bit, so we were so glad to sit in an air-conditioned bus.  We sped through the Lungau and up to Obertauern, my nose pressed to the window like any good tourist.  Maybe its just seeing the usual from a new perspective.  Our train at Radstadt was delayed, then when we sat down, we found our coach had no aircon so we adjourned to the buffet for the rest of the journey.  Very picturesque through the gorges and mountains to Salzburg. The new Railway station we arrived at was buzzing, but we noticed for the first time the beautiful pictures high up in the main foyer.

Another packed bus to the airport. I got a window and we saw the blocks of flats filling the suburbs catching snatches of life. One staggered me.  We were stopped and outside a shop I saw to alkies drinking together on a bench.  The I noticed one had a crutch, and a big stain down what looked like a hospital robe.  He had a black eye, and when he lifted his hand, a drip attachment in his hand.  Dave noticed he was barefoot too.  Had he escaped?  There was no hospital nearby, we’ll never know!

This was the first weekend of the school holidays and everywhere were groups of teenagers clad in similar tee shirts ready for their drunken trip to Ibiza and other places.  As Dave and I walked through the terminal there was a real stink of teenager -ugh!

We met family  and spent the next few days going to huts, walking, the shooting festival and it really was like being on holiday.  Usual routine gone.  Good company.  Even exploring a bit of Obertauern we didn’t know. Maybe it was taking the unusual journey that gave the sense of holiday, but I must say there’s a lot to say for a holiday at home! 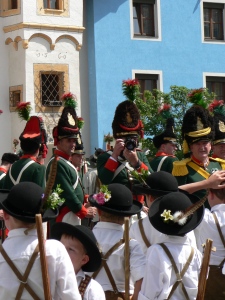 Recently we had the 40th anniversary of the local militia. They even had the local kid’s group with wooden guns!

Each village has one and to us they look like the Toytown soldiers.  This is the Tamsweg group above.

The Samsons and the twins were there too!

For a neutral country, Austria could easily defend itself with old rifles!  In Tamsweg we have a gun shop, no bars on the window and all sorts of guns and devices displayed.  In Murau, they even have the ammunition in boxes in the window (though of course they may be empty).

We always show these shops to visitors – how long would such a display last in the UK?  They even had a cannon, but we missed the firing.  It was 36 degrees and no one fainted, the red cross was going around with water though (but not beer!) 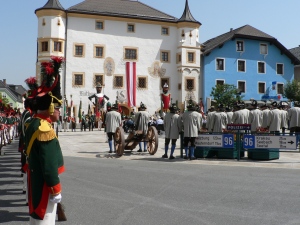 We have had a spell of what is maybe normal spring weather, damp air, heavy thundery showers but thank heavens, no frosts.  Of course it means  that the plants are well watered but now we begin to panic about mould in the greenhouse!  Still, I’ve got everything planted out, even the emergency windowsill courgettes have been bunged out on a plot! I can sense the frustration of the farmers as it going to rain everyday for the next week according to the forecast, and its the start of hay and silage time.

The birds have mostly taken themselves off, but to my delight, this year a family of Greenfinches has stayed behind and are chomping on the few sunflower seeds I put out. The sparrows don’t argue with them like they do the Tits and they share the table together. We have a resident cuckoo for the first time, its worse than a clock you can’t switch it off!  The meadow below us is full of campion, ragged robin, daisies of course, Buttercups, Spreading bellflowers, and Meadow Bistort.When the sun shines, and I’m doing the ironing, I have the bedroom window open and the smell comes wafting in.  I often put the radio on and have found the Radio 4 extra, last week I had the joy of a Morecombe and Wise show, plus the Dad’s army radio show, quite a giggle or am I showing my age???????

I’ve met my share-dog, it’s a lovely golden retriever, the vet thinks about five years old, already spayed, how could anyone bother to buy a pedigree dog, have it done, then abandon it?  Lizzie and I are looking forward to our dog duties!

One thing I have noticed on my blogs – no mention of stress, hating job, sleeplessness, tiredness, I just go, do me cleaning, come home and forget about it.  Bliss, thanks God!

This summer is going to be the best for several years, I’ve decided and that’s final! After all my time teaching riding and the summer when I worked seven days a week at Lois’s stables when he was hurt and then the last two at the Burg with all that associated stress, I’m going to be more at home.  As well as having weekends, I’ll have the Bank holidays. This means I will finally have the time to work on my garden, instead of filling it with flowers and then neglecting it.  I’ll have time to harvest my veggies and fruit and make jam. I might even have a go at some wine making if I can find the gear.  I’m putting a second picture in, wonder if that’s allowed?

This also means I’ll have time to go walking in the mountains with Dave and friends. The Bergs are completely addictive, although I cuss and swear as I trudge up and have to take deep breaths, this year I’m fitter (but not thinner) and I cant wait to be up there in that clear air, beautiful views and the silence that wraps them. Of course it’ll also mean Kaisershmarrnn testing at the huts –there’s always one somewhere on a route.  And the camera will be with me, as I disappear for a shot, leaving Dave exasperated or talking to himself.  We just need the last of the snow to melt – which this year means some places will be inaccessible until July, never mind, I’ve got all summer!

Most of our villages in the Lungau install a May pole, and the following week have a climbing competition.  Ok, the guy does have a safety rope, but there’s no mattress or any other security.  He climbs barefoot with this glue on his hands.  The poles maybe up to 100m high!

This is my first attempt at the weekly photo challenge, I can’t find the Trackback address on the Daily Post page, so I just hope it works!