Following our training for EAGALA, Edith and I decided to run another Workshop to highlight the Equine Assisted L earning, (EAL) and went for it. This time we invited  people directly, did a Facebook page and invitations, advert in the paper and in the local tourist office – result, three people and two kids from the stables.  I guess its time to re think, we either have to go down the line of going completely professional, doing more workshops, more plugging around offices and officialdom, or maybe just have an open therapy session, such as a de-stress day,or relaxation day, but do things regularly. The other option is just leave it as it is – we get occasional people coming to us.  The changing situation at the stables where there’s more and more liveries who expect to use the arena 24/7 makes it difficult with privacy  and safety. Maybe its time to move on from the horses, despite my love of teaching riding, I’m determined this time to stay on God‘s agenda not mine.

Still it was fun working through the  basic EAGALA exercises and  seeing the dynamics and personalities of our victims, no,I mean volunteers, who were mostly complete strangers to each other.  We’ll see! 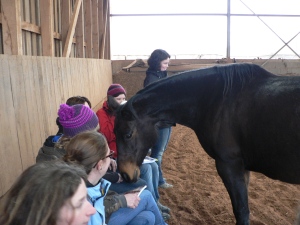 This is the third time I’ve done this – mainly so I can keep my certification renewed and it was a great chance to network and keep up with new stuff. It all comes under the banner of Equine Assisted Learning (EAL)  or Therapy  (EAT) which is becoming more widespread as therapy. Last time the training was in Austria and as I’ve said, this time was a bit of a trek.  There’s a part two in the same place this summer, but I don’t think I’ll have the cash!

We had a different trainer this time, Mickey from the USA, so she brought a whole new slant on things. It was far more tiring this time, maybe me, maybe the weather, I don’t know. The training was more relaxed, but its the first time I’ve heard so many people question the method and disagree with it.  What their final verdict is I can’t tell. There were Germans, several Americans, mostly due to the USA airbase in the area, a Dutch couple, a Swiss lady and me as the token Brit! This time, the trainees themselves were discovering things about themselves, which shows how powerful this therapy can be. There was annoyance when it was not picked up that a trainee was in tears, but I could see why myself.  It was a totally unreal situation with people watching, a disparate band of people who didn’t know each other and a task that wasnt related to this group situation.  The trainers did debate what to do, and I think they made a right decision to let the group deal with it. In real life, a parent, sibling or friend would deal with this.  My only question is that if you are providing emotional safety, is comfort a part of this?

We worked though all the standard exercises and what stood out for me, is that I step in too soon, when people should be allowed to,’follow the process’.  We also did role play and I was put in the role of the Mental Health expert which I found really difficult as I couldn’t stop watching the horses. Yet Edith and I both felt we’ve been working together on the right tracks and this has helped us to add more skills to help people.

The only thing I didn’t like was the end, it ran over and people had to go and there was no formal Goodbye, or certificate giving or even a photo shoot, which left me a bit lost. Similarly, the translation between the two languages maybe made things take longer and maybe it would have been better to stick to English or German. However, I was so tired at the end all I wanted to do was get back to the Hotel and crash out! Do look at the articles below.

Reviews of books to suit every budget and host of Goodreads Monday, Time Travel Thursday, All Over Instagram and Places My Books Have Taken Me!

For Readers and Writers

The No.1 Site For Reader Giveaways & Kindle Book Deals