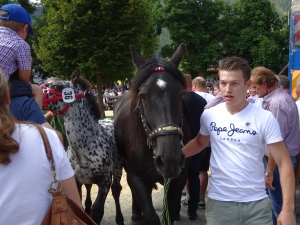 For the first time in eleven summers, we made it to the horse market. When Dave heard of it when we were first here, he threatened to lock me in the cellar. But I’m OK now! 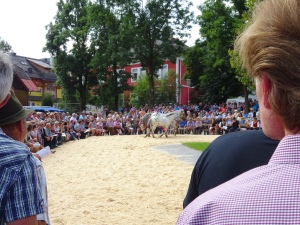 I understand there used to be a lot of foals taken away for meat, but this has changed. We only saw Norrikers and their foals. Beautifully turned out and running around the ring. The Leopard spotted ones are greatly sought after. But the best price went to a back one for €1800 euros. No more meat trade at that price thank heavens. 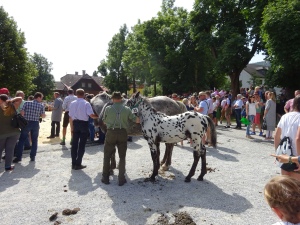 It is a bit brutal as a lot of the foals are separated from their Mums after this. One youngster tried to kick his way out of a box as we left, but they all leapt out of the car and calmed it. I think someone stayed in the trailer which is illegal, but shows there is love and care there! 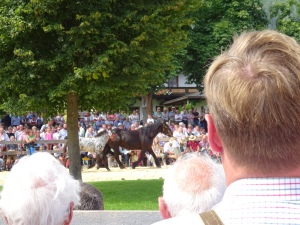 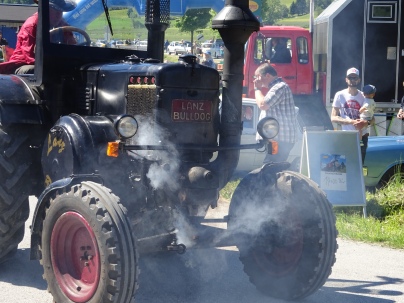 At the Old timers Rally today in Mauterndorf! 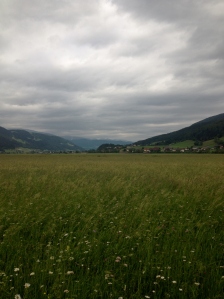 This June has been at times rather on the cool, cloudy side, and there’s been snow over 2000m. 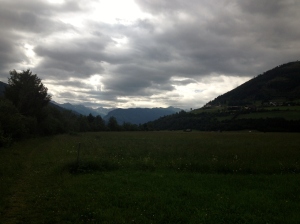 Poor cows, just been shipped up there and this happens! 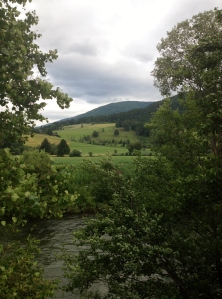 Near St Margarethen towards Pichlern

But to me, its a joy, I just love walking in the coolness, and some of the hay fields are still uncut, so there’s a wealth of flowers. 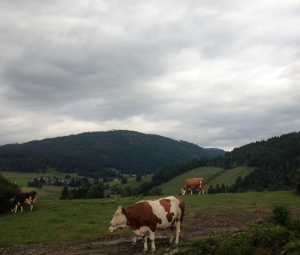 Cows, St Margarethen – well you knew I’d be snapping them sooner or later!

Along side the Mur is my favourite bit, I suppose it comes from my childhood and happy times in the Winchester water meadows.

But I do so itch to get up in them thar hills! 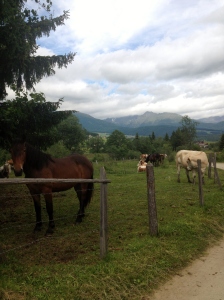 but it’s been either raining or we’ve been working. Hey ho, we’ll get there. 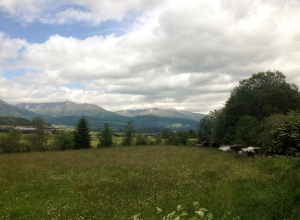 By Mauterndorf Airfield, towards Weisspriach 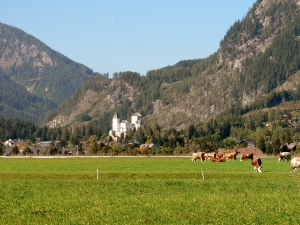 Dave and I went for a walk around Gröbendorf from Mauterndorf, and from a grey start it turned into one of those glorious blue sky days. 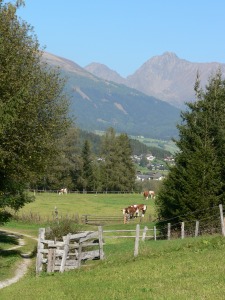 I drove Dave nuts with the camera. 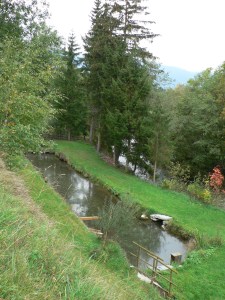 So my original theory was that the ruin was an Smithy and a forge that was waterpowered, as I’d seen ponds  in farmhouse garden further up the road. 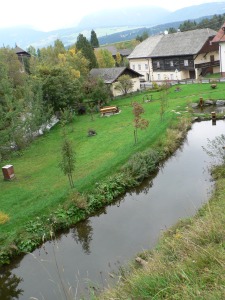 When we we looked, we could see they were steam fed and had never been diverted form the Turrach, so were never storage ponds for the forge.  One theory gone! 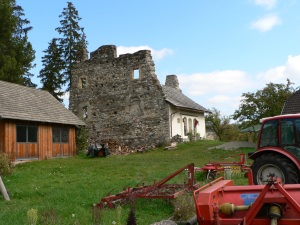 Then we walked onto the next village , Pichl, where  I thought there was an oven for smelting. 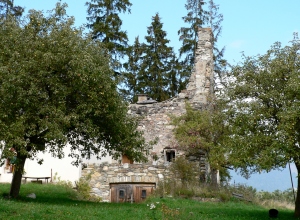 Wrong, it was a Knights Castle and was ever only a castle. 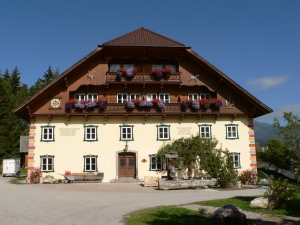 It was surrounded by the farm  of what must be a very wealthy farming  family.  This must be the poshest private chapel in Lungau! 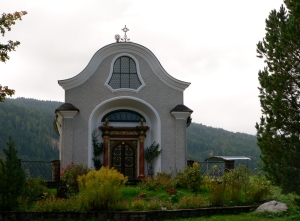 So still no ideas of the origins of the ruin, but had a great walk!   Time Team please come and sort out!!!! 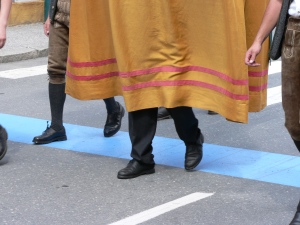 So on to the last service for this year in the Catholic church at Mariapfarr.  It was here I came to realise how I enjoy the services here far more than in our usual chapel in the Old people’s home.  Maybe because it’s used mostly for funerals?  It was pouring with rain but it didn’t dampen spirits.  Heidi took the service and she repeated the reading from 1 Kings 19, v1 -18 that Tadek did earlier in the summer. He had concentrated on the need for a break and time to listen to God.  Heidi took the line of after the break you need to come out of your cave and do God’s bidding after you’ve  heard his word. She also used some songs that had familiar tunes but German words.  For the first time since I’ve been here, I felt fed and filled with the peace of the Holy Spirit after and during  a service.  I was ready to take the reins up again of this life. We all chatted and went home in the rain.  Dave and I were going to go to the horse fair in Mauterndorf, but apparently the parking was chaos, so we went and exercised the sofa for the afternoon. The phone rang in the evening and Dave’s Dad is in hospital with a chest infection.  Getting better though.  So I opened my big mouth and said have you considered that we’re a bit unfair on your family leaving them with all the responsibilty for him?  But if we were to move back, we could be just as far away travelling wise if we were in Wales for example, after all we can do door to door to the UK in eight hours.  Then he could just die and we’d  have burnt our boats. We managed to conclude we must talk to his brothers first. Kevin does seem to like the caring. As soon as we started discussing this, my stomach began to knot up, maybe I don’t want to go back as much as I thought!

Monday: So as it rains I am sat here, with the smelly dog peacefully sleeping at my feet –she’s in no hurry for a wet walk.  I’ve been writing this all out.   Dave and I must talk about  recommitment.  We’ve been asking for signs and instructions and we have been given them, just I was too dumb to read them the right way.

This one had me thinking,  I’ve got flowers to do on the Travel Challenge by Ailsa, so they’re ruled out, so here goes! 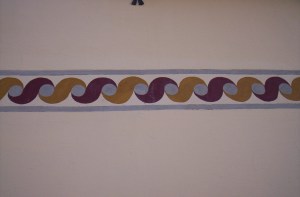 Ok, so it’s not entirely purple.  This is a pattern you see on a lot of the highly decorated houses in the Lungau, this is in Mauterndorf. 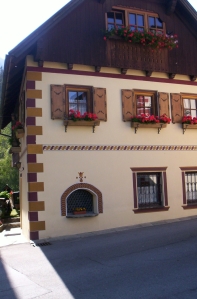 Its called the Running dog, I’ve tried to do it myself but made a real mess of it.  It’s also on the Getreide Kasten which I’ve already blogged about. This one is at the Freilicht Museum Salzburg (Open air museum)  and is supposed to date to the 17th century. 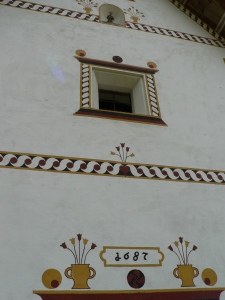 Some painters travelling from Rome to Salzburg paid their way by painting, maybe not a direct route and you’d expect it to me more widespread, but maybe they ran out of money in Lungau………. 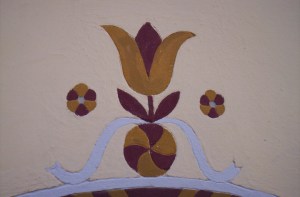 However, I’ve seen this on Roman mosaics in Time Team, so reckon it dates far further back, we have at least one villa here and loads of Roman bits left lying around!  When you live in monochrome for up to five months of the year you can understand why people love to paint their houses!