Isopan when it was a paper factory, photo taken we think from one of the chimneys by Martin Gauch who used to live in our flat

On the way back from walkies the other day, Swingle and I met Mr B by the Isopan factory, and after she had finished mugging him for biscuits, he turned to the tower and said – did you know I built that?  He had apprentices under him , so he  must have been a boss! What is now a brick factory, before the war was a paper factory that made special ‘Hirsch’ (deer logo) wrapping paper that was sold all over Europe, but by the nature of it, very few examples survive. The factory was ahead of its time, creating accommodation for its workers in the 1930s, and folk from all Europe worked here. Our house was the women’s house with a Kindergarten and by the Jagglerhof, another identical block housed the men (so not  far ahead), and the railway station is still so named.

The factory from the other side of the river Mur

Mr B went on to say there is a tunnel that runs under the road  from one side to the other side of the road- I wonder if that is still there? Mr B was born in the Mur house,which was close to the factory which has since been demolished, I thought because the road was widened, but he said that no one wanted to live in it as the work decreased in the factory. He remembers it flooding and his Dad having to go out in swimming trunks!

You can see the chimneys in the photo, which My B said were dynamited, as either they weren’t safe or the factory was closing. One went down right across the road, the other towards the Mur. On the edge of the factory was the Madlingwirt that is now gone. he said when he worked at the factory lunchtimes were great with a beer (unsaid) they would have chess, chat, harmonica playing. I mentioned the old Fire station that was on the corner of the Thomatal road  (see picture at top, brown building) and he said he’s been in the voluntary fire brigade that was stationed there. All of the things he told me took place in the 1940s, so I guess he was too young for service in the war, but you don’t like to ask an old man his age….

He said that there was wood stored all over the place, but the first fire he remembered was when the Herrenhaus burnt – he said they all had to dash over and they only had stirrup pumps and had to rush to and from the Mur, but they must have got it out, although the building was later demolished. 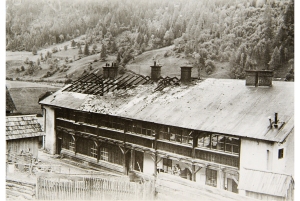 The burnt Herren house, identical to our block

I asked about when the factory burnt down. He said it happened in the winter, and they were woken in the night in the Mur house by someone banging the door and yelling Alarm! On the river side of the factory, there was a lot of larch planks stored and these had caught alight. He said there were French people working there at the time. So the fire brigade rushed over and by now they has electric pumps for the water. But it was -35c! As they pumped the water, it was freezing, and they had to fight all night, with brigades from all over the Lungau coming to help. The did manage to put the fire out by the morning and save the machinery.  But Mr B said that it was so cold, their uniforms froze! He said the highlight was being brought coffee by the French to keep them going. But I think the damage done meant the factory closed. We have heard rumours that it was an accidentally on purpose fire, meaning it and the various houses could be sold off….

He bought his house and we have always wondered why it had such a big cellar floor although at the side of the road, it turns out it was the village Smithy! He rebuilt it from the cellar up in the 1960s.

I do find local oral history so fascinating and its all stuff that could disappear, Swingle and I will chat with him some more! 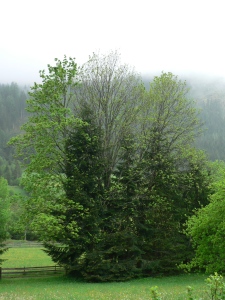 At the bottom of the garden are three sycamore trees, which I watch throughout the year as they come into leaf and are brushed by storms and when they are filled with seeds, to when they go brown and sleep for the winter.  They tell me when a storm is coming along the valley and hide the singing birds.  They are there in one of the oldest photos of here that we’ve got.  What they must have seen, the building of the factory, all the workers who lived here, the tyranny of Mr Hart , who’s father owned the flat upstairs,  a Nazi ,who terrorized all the local kids and whose taint still is on his son.

Our block of flats was built in the 1930s as accommodation for workers in the paper factory that was across the river. It made Hirsch packing paper that went all over the world –  now long gone.  In the picture above, our block is the long building in the left hand corner.  Our flat is at the far end.  You can see the baby sycamores to the right of it. We think the picture is about 1950.

The factory was accidentally (hmm) burnt down during the war, and the flats sold off – to guess who, My Hart who was a leading member in the council. I remember our Estate agent saying our flat has no history – but I think it must have loads.  Workers came here from all over Europe.Yet it was the young Mr Hart who planted the pines that blocked our view of the river, and planted fast growing pines that block one side of the garden and he under planted the Sycamores, strangling the life out of them – the middle one this year looks weak and ill.  What does this say about the man?

I’m sat here, feeling exhausted and really stiff after my trek into Germany.  Since I’ve been away, there’s been a major thaw, I can’t believe that my garden which was under a good two feet of snow now is only half covered.  The first thing I noticed when I got out the car was the sound of the waterfall.  Muted by the ice and lack of water, it’s now roaring and brown as the water escapes the valley.

We made the news twice while I was away you can see thus clip above until Friday. The first night when the Firebrigade had to pump out properties in Tamsweg, including where Dave works, and lay sand bags. The snow was melting so fast but the ice was still blocking all the rivers and drains.  The next day, Madling made it too.  On the hill above us where in 2007 we had landslides, the earth was starting to wash down the hill which could lead to the same result, so again the Fireman were clearing the streams  down to the Thomotalerbach.  Now today its raining. I can hear the rain on our metal windowsills, which I love hearing when I’m warm and sat indoors!  Hopefully that means its snowing higher up, but there are avalanche warnings galore and someones been killed in one in Obertauern.

I’m really quite sad that it’s all disappearing so rapidly, I’ve really got into the snow this year!  Perhaps we’ve lost the snow  because its taken itself to other parts of the world instead – see articles!