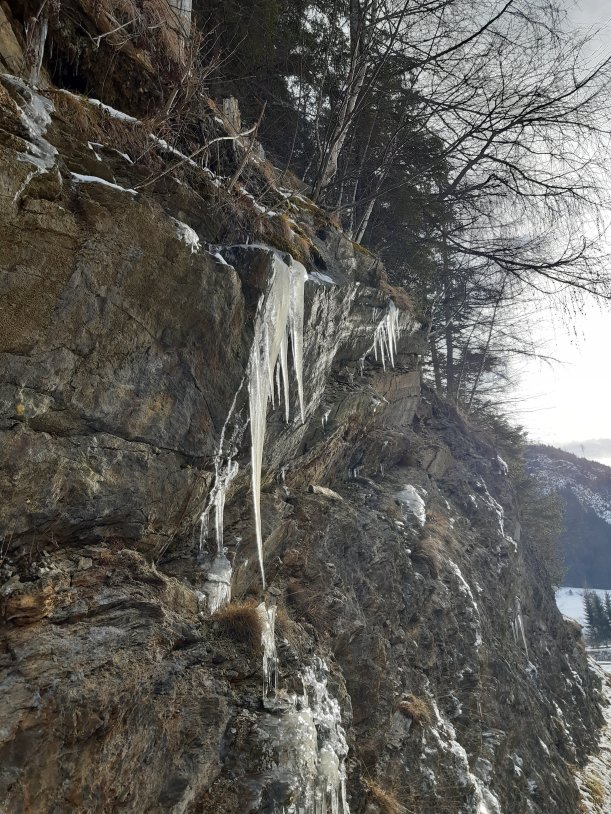 How was your Christmas this year? We had the most wonderful time with family. Catching up and making new friends.

Now as the new year gets going, life is piling in again. Two books planned for this year, three short stories in note form and at last someone to translate my books into German. Holiday house cleaning season. More English students and my 60th birthday party to plan. I’m feeling snowed over mentally and physically already!

How’s your new decade showing up?

Bella came to stay for a few days and we had a ball! 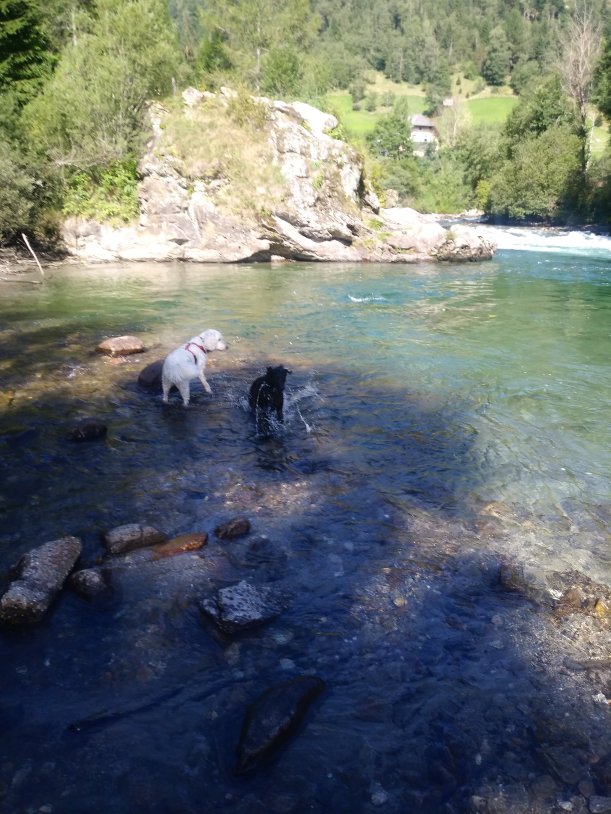 Paddling was best in the hot weather.

Plenty of games of bitezes! 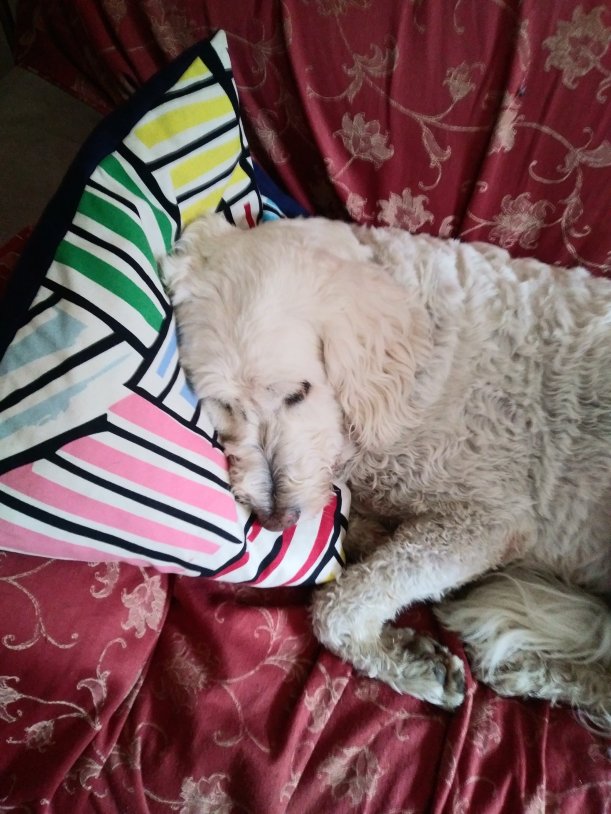 I even let her sleep on my favourite bit of the sofa!

In the woods was fun too.

Bella fell in the pond once, I did warn her! Oh it was fun!

We were all so tired, that we slept deeply, and were refreshed despite some bright spark having a firework display during the night.  We breakfasted on the roof terrace – needed a bit of tlc I think. The semmels were huge, but no fruit juice but squash and no  fresh fruit.

Off to Schonbrunn, this time perfectly leaving Stef to navigate, we piled out of the station with a walk of at least 500 m to the Schloss, what an inconvenience!!!! We queued briefly for tickets, some clever spark has put a restaurant right by the ticket office nice trick!  I don’t buy unto all this Sissi adoration in Austria, so we just had the basic tour, which had a start time for the tour.  So we went for a wander in the gardens, magnificent wells and fountains everywhere, lots of follies meant to look Roman but all made up!  A lot of local people were running and walking around the grounds- wonderful, that’s how it should be. 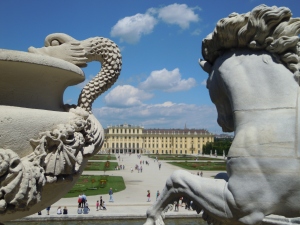 We went for the tour, but there were so many tour groups it was impossible to really see the rooms, a lot of which were empty state rooms with occasional chairs, and a lot of gloomy Romantic pictures. And of course, having been spoilt by the National Trust in the UK, we expected to see more of the behind stairs stuff, and didn’t, different cultures of course.

We snacked in the gardens and then went to the Maze, of course the daughter got to the middle first and laughed at the stupids being so slow!  We gave the zoo a miss – after all, Zoos, art galleries, museums are the same the world over, so we chose just the particularly Austrian stuff. 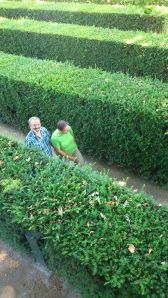 We then walked up to the Gloriette at the top of the hill looking back at the Palace. I read that there was a proposal to have a ski competition there. despite the snow melting we wondered how they would miss the fountain!   It really is worth a visit, but if I hd chosen I would go late or early in the season to avoid the crowds, August doesn’t bear thinking about

We then did the Prince’s gardens and were creased. A hot day, dust and a lot of miles we had walked. We didn’t even get to the Strudel experience which was on the ticket. Still the restaurant we collapsed in sprayed a lovely cooling mist on us as we sweltered. Back on the train to the hotel, we ate early then went for a walk around the area. 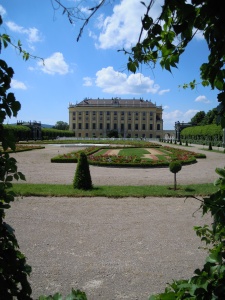 Quite close to the Hotel, just by going down one backstreet, we were in the residential area and the sports field and mini golf.

It was just nice on such a hot evening to have glances into inner courtyards on the blocks and see people enjoying the weather, sitting at tables having a beer, enjoying life.

Nevertheless, we were all exhausted, so much on foot and the heat. Much needed sleep.

Having blogged this in November, and in the hope that spring really is not far away, it’s time to see how this forecast went!

There’s a local man, Horst Noebl -well in the Pinzgau region of Salzburgerland who has made some pretty accurate predictions of the weather.  We’re in the same county so it should apply!

Its going to be a snow rich winter, worse (that depends on your outlook) than last year. Not really. It wasn’t snow rich until the middle of January.  The resorts had enough and at the right time, but not ample amounts.  We had ten days with no snow at all on the ground in January and even went walking up in the usually inpenetrable hills!

The rest of November will be changeable with lots of precipitation. For the mountains there will be a good covering of snow. However it is likely these in December will melt and before Christmas it will be unusually warm. Before Christmas, the cold and new snow will also arrive in the lower lands.  But it is also possible that it wont arrive here until after Christmas (that’s hedging your bets)! Right! So Right! ‘cept the melt lasted until the middle of January.

January will be very cold, to -20, but with little snowfall.Wrong, was when it really began to snow properly.  It wasn’t that cold, it was relatively mild, to -10! There was quite a phase when the snow was just too gripping for good skiing.

February and the first part of March will be the time for heavy snow fall. The Easter holidays will be great for skiing.  Right, but it’s now the beginning of April and it’s still snowing, although it melts quite quickly.  What this guy didn’t see was the slipping of the Jet stream to the south, which has delayed spring, caused floods in southern Europe and extra snow, a delayed spring. 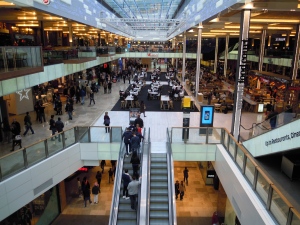 We haven’t been home to the UK for two years and in hindsight it was too long. Hence the bouts of homesickness I’d experienced  last year.  I’ve  had hints of wanting to return as well, so our trip this Christmas was a real test. The pre-Christmas weeks were frantic and I was exhausted, but it didn’t lessen my enjoyment of the process of catching a plane and doing all the stuff.  As we landed at Stansted I was completely choked and wanted a boo!  Oh, no, I though, I do need to come home, then I remembered that I do this every time.  Back through Passport control, I was thrilled to be in a queue where I could understand, and was vastly amused at the couple in front of us who were ringing home to find a party of some sort had taken place and the resulting chaos….. On the bus I found I couldn’t understand a word around me, just like being in Austria!

We were based in Stratford (more of that later), and for the first couple of days I drank in the houses and streets and the familiarity. It was so good to see my daughter and catch up, just like you can’t on the phone. Down in Dorset, it was so exciting to meet with my son and his fiance and discuss all the upcoming wedding plans. Unlike London I could once again understand all the conversations around me and enjoyed the soft, warm (comparatively) wind and the damp air and rain, not to mention the sea.   Back there, it was like putting on a comfortable old shoe, that hugs and soothes. I got used to speaking English the whole time and feeling  a part, not an outsider.  It was a wrench to leave there to go to  Aldershot to see the rest of the family.  But it was all still familiar and welcoming, especially the shops filled with familiar stuff, enjoying a curry and Fish and Chips, though I didn’t get to the pasty I havered for!

I’m such a nut, I still felt homesick in an odd sort of way when I was there as I knew I’d have to leave, I stamped on that silly emotion. I didn’t want to come back to Austria, but its difficult to leave family anyway.  The time we spent with the kids was magic, but we were all enjoying a holiday time together, having looked forward to it and Christmas.  The reality of the in-laws tuning up on a weekend when tired  is different. It was real quality time and so sweet.

I felt nothing as we landed in Salzburg, I wasn’t as tired as when we left.  I wanted to get home as by then I’d had enough of travelling.  But no, I don’t want to stay here forever, life here is in a bit of a rut and I’ll have to find some more friends, jobs and hobbies this year.  Austria will never be home, I don’t want dual nationality, I’m English and at some stage I will go home.

A few days on, despite the down of returning to work, I’m really at peace. Maybe because we’ll be back in the UK for the wedding, which I’m so excited about.  the jury on Austria is still out…….

For a short while, I’m becoming a travel Blog writer as I blither on a bit about our trip to London this Christmas.  Having costed it out, we took a taxi to the Airport. We  flew from Salzburg to Stansted with Ryanair,  then took a National Express coach to Stratford, near where to Olympic games were held.  We rented a Marlin apartment nearby and spent quite some time in the nearby Westfield Shopping Centre.  After an exhausting few days, we took the train to Wareham in Dorset and spent  some time in a lovely Bed and Breakfast, Easter Cottage, and  the days chilling with our son and his fiance, and tripping on the Swanage railway.   We then all drove to Aldershot to see Dave’s family, and  stayed in a Premier Inn. It was all highly organised, unlike last time when I forget the Credit card so we couldn’t hire the car, all went smoothly.  It sounds a big rush, but compared to other trips it was ok and we didn’t arrive home exhausted!

I admit, two years are  too long to stay away from home, and it was so good to be back.  We returned in some ways quite unsettled as I’ll explain………..