We’ve been having a long spell of clear skies, frosty nights and wonderful days of walking. After the early morning mists roll away, it’s wonderful! 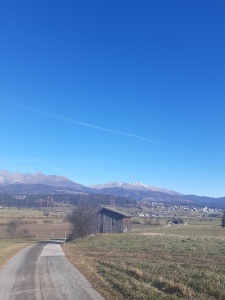 After the chaos of the snow and floods last year, this is a real blessing! Not to mention no damp, grey days that create gloom.

This is a new path we took near Mariapfarr. Hills in the distance, was a flock of Fieldfares cackling in the trees. The Vogelberries added a bit of colour.

I found a HEDGE! First one I’ve seen in the Lungau! 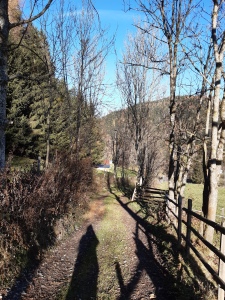 November can be a pretty grotty month, this time last year, it was heavy wet snow.

Waking in the afternoons is a pure joy. The sun is still warm on one side, the other is cool in the crisp air. Underfoot is cold. In the woods is that autumnal smell of gently decaying leaves. 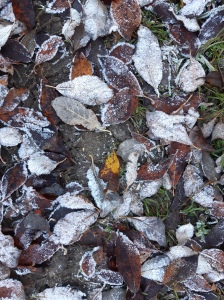 In pockets, there’s still frost, that might stay here until the spring.

The larches are flinging out their last colours.

There’s a wonder in the air, of the dying year, of crisp joy, a sense of treasuring this before the hardness of winter. 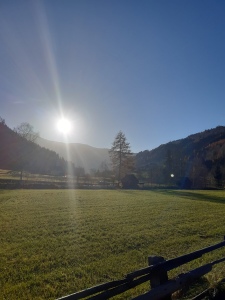 David Essex’s, ‘It was only a winter’s tale’ sometimes plays in my head at this time. Not of the lost love, but that feeling of autumn, cold and change that it brings. 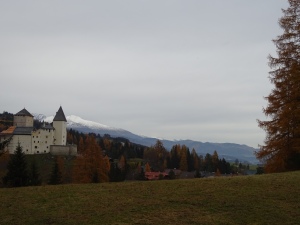 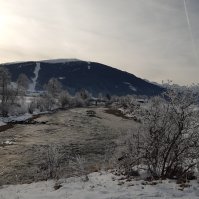 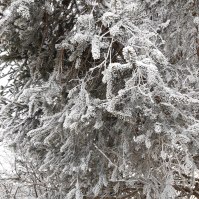 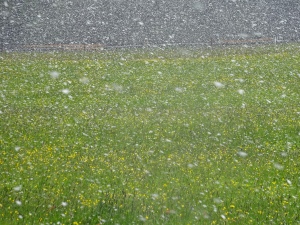 Anyone else still having a hyperactive April with an added arctic blast? 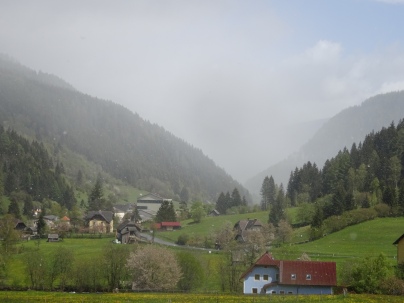 For the first time in about five years we have a really cold, dry, beautiful winter! We had snow soon after Christmas, and then  cold, regular temperatures of -14 to -18 at night and well into the day. Crispness underfoot. There’s a big cold blast and clear skies over us for most if the next week. Love it!

Only poor Swingle isn’t too happy, while she loves bombing around in the deep snow, when it gets to less than -7 or 8, her paws hurt and she waves one in the air. I have to warm her paw and clear between the pads. Its worse on the roads and where there’s salt. We’ve tried boots, she takes them off, we’ve tried a coat, she takes that off. So we go up the lane in the morning, where its just snow and the afternoons to warmer paths.

There’s perma-frost on the trees that are permanently in the shade, and in the mornings, ice crystals form in the air. The rivers are backing up with ice, Where we were walking this afternoon and there were waterfalls and flooded banks. Beautiful, but of course my iphone died, I’ll have to go back later in the week with my oldie……