This warm, wet summer has made for some stormy weather and some spectacular clouds!

December 17th. Like a herald of change, later in the day it actually rained!

I took photos from the kitchen and out with the dog as it faded (the sunrise, not the dog!!) Hope you enjoy the slideshow.

I understand that England is experiencing a very warm winter and things have gone a bit odd here too.  Since last week the weather has warmed considerably and we’ve a prediction of +20 for Austria later this week.  It just felt all wrong that suddenly there was the sound of water cascading down the drain pipes and warnings everywhere in the town of roof falls of snow.  The roads came under water where the drains are blocked by snow or frozen.  Apparently this sudden warning isn’t good for your body either.

Then this weekend, things cooled down, to nightly -1 or -2, but still warm by earlier estimates.  On Sunday it began to snow and we had about 2 inches by the morning, and temperatures of +5.  Of course, Linda couldn’t let it lie and melt, she was there by 7.30, and then complained to me that it was melting as soon as she put it on the heap……….. 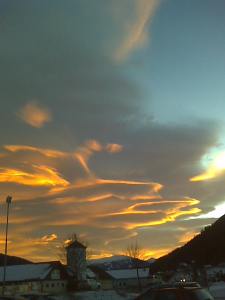 The snow is now what I call play snow, great big flakes being blown down to us from the mountains, which is cute but not making big heaps on the ground.  Maybe it will be an early spring after all, but for the skiers there’s still shedloads of the white stuff on the mountains here.

What I hate the most  when it’s thawing, is the amount of ice.  Our yard is like a skating rink, and at work the other day I stupidly went on a huge patch and couldn’t do anything but slide backwards till someone caught me!  This was at St Martin which I’ve now packed in as she only called me in once this month – it wasn’t worth the petrol money 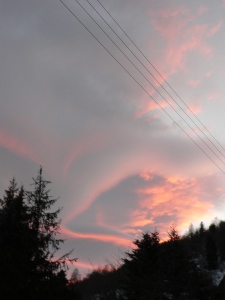 The main point of this blog, is to say on Friday as the warm front came over us, we had great examples of Altocumulus lenticularis clouds which people often think are spaceships.  As I picked up Dave from work, there was the most stunning sunset and I only had the Mobile with me, so I now have permanently moved my new camera to my handbag!