I haven’t done much about the route God has set me on for a while, reasons of confidentiality mostly.  However, this one would be a good one to discuss with people. It’s amazing how similar all three accounts of the Garden of Gethsemane are.

I was really knocked for six recently when I read Matthew 26 about the garden of Gethsemane. I’ll work my way through what I’ve had said to me.  Firstly, someone near to death with sorrow,(v 38) an utter depth of grief, having touched on it a little though the death of my mother, and some renewed grieving for her, I can see how this is maybe the deadliest emotion that can slay the body and mind, and how it could cause Jesus to sweat so heavily it looked like blood. Of course this was tempered by the physical and spiritual trial that lay before him.

Then I was drawn to asking, well, if the Apostles were sleeping, how did they know what Jesus said? One account said that their eyes were heavy (v43), so maybe they were drowsy more than sleeping, but not enough to be out cold.  Why did Jesus go back three times?  It grieved Jesus too that his friends couldn’t hang on for him.  He tells them in Luke 22, v 40 not to fall into temptation. Is sleeping when we should be awake a temptation? Maybe they were full after the Passover meal, how much idea of grief did they have or foreknowledge of what was to come?

Then on Sunday, we were watching a teaching on prayer, and the guy said that sleep is the biggest thing that stops us praying and talking to Jesus, having this, what now seems obligatory quiet time.  I’m all for this, as long as it’s not made into a law, eg you can’t be a good Christian if you cant do this, I’d rather its more that if you want to get closer, make some effort. It’s up to you.

So is Jesus saying I’m sleeping in my relationship with him?  My body is definately weak! That I need to wake up and be attentive?  I admit I’ve slipped into complacency with my prayer and study time, the old arrogance creeping in of the know-all. Ok, a call I’ll answer. All my life I’ve been a big sleeper, and without more than the norm, I’m a zombie.  The under functioning thyroid means I sleep.  Then I need to sleep less, he must sort this out, because I can’t, obviously. I need to stop sleeping so much physically and spiritually because it grieves him. Or is it simply really my time now, to wake up and get on with the whole thing??????? 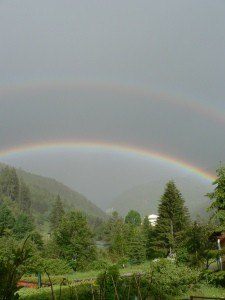 One of the recent Holidays here was for Ascension day, as in when Jesus returned to heaven before he sent the Holy Spirit down on Pentecost – next weekend’s holiday!  Now I don’t hold with all this time and date setting it’s just a man-made thing although we can guess a timescale from the events in the Bible.  There was quite a lot of stuff on the TV on the day here, which I liked. In the UK no one would dare to stand up for the Faith of the Country, they might offend a Muslim  somewhere.  I’ve never heard of a Muslim complaining of things which are often found in their own creed.  It’s the idiotic political correct politicians who cause all our problems –rant over!

Back to the TV, they were showing a church that is  dedicated to the Ascension and the pictures on the ceilings.  One of which showed one of the Apostles looking heavenwards, at a picture of the soles of a pair of feet!  My first reaction was to giggle but Dave told me off!  Then I thought, well maybe this is a simple way to portray the event, although we’re told he disappeared in clouds.

Its one of those mysteries I suppose is beyond human understanding, although as Science increases more theories come forward and explain things.  How did a man die, resurrect then disappear into heaven, God knows!  At church on Sunday we actually had a good sermon about this time for us as Christians. During this pause  inbetween the two major events we can eagerly await the arrival of the Holy Spirit – the Pastor was forgetting himself a bit about how this is all a marginal calendar.  But what struck me most was that unlike the Apostles at the time, we know whats coming.  We have the sureness. They had only a death, a miracle and an abandonment.  If only they’d know they wouldn’t have had to hide in fear and trembling!