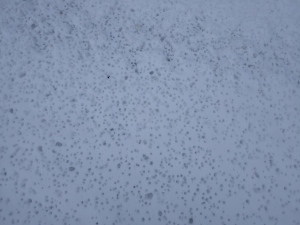 I was so excited to finally see this after eleven years! So much snow, and I’ve seen this rarity only once. People look knowingly and say its a Lungau rarity. It only happens late in the snow year. So now I’m sharing it with you, it really does look like coral doesn’t it? 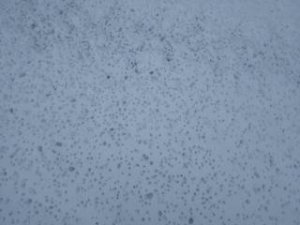 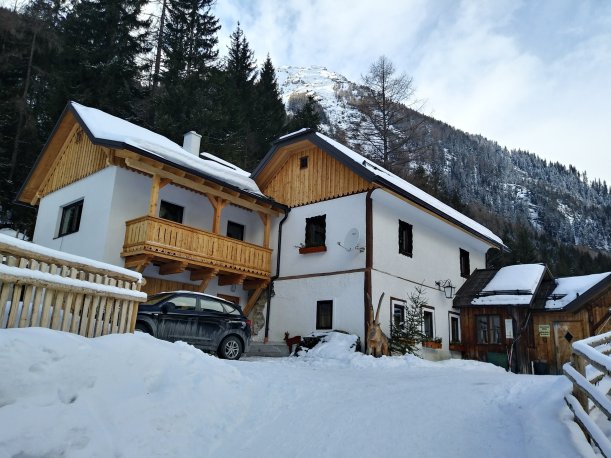 Last week we went back to the Diktlerhütte, our favourite hut in Lungau to see what had happened. In the spring we’d seen major building work going on and feared it was turning into another gastro hut like Ludlalm. 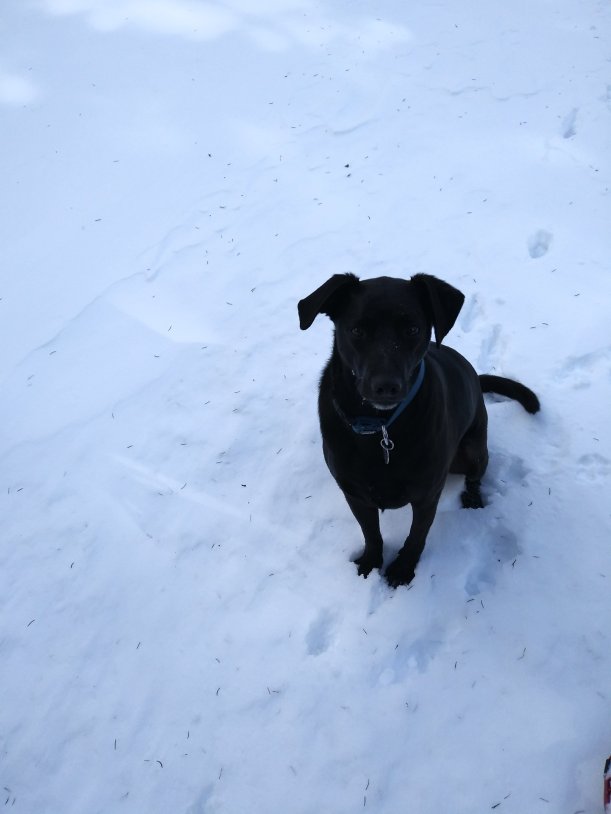 Joy! Even Swingle was pleased. They’ve just put new storage, a new cooker, heater in the main room, they’ve not even changed the menu card or the pongy bogs! Same staff! Same menu, so we had a wonderful roast and walked along the Cross country ski path back to the car. 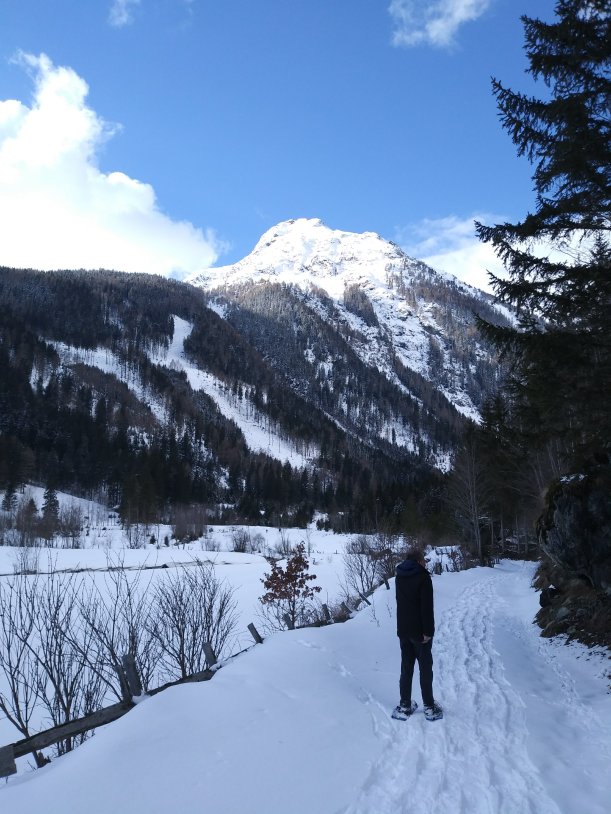 We’d parked in the new carpark, and I suddenly saw this old hut through the trees. 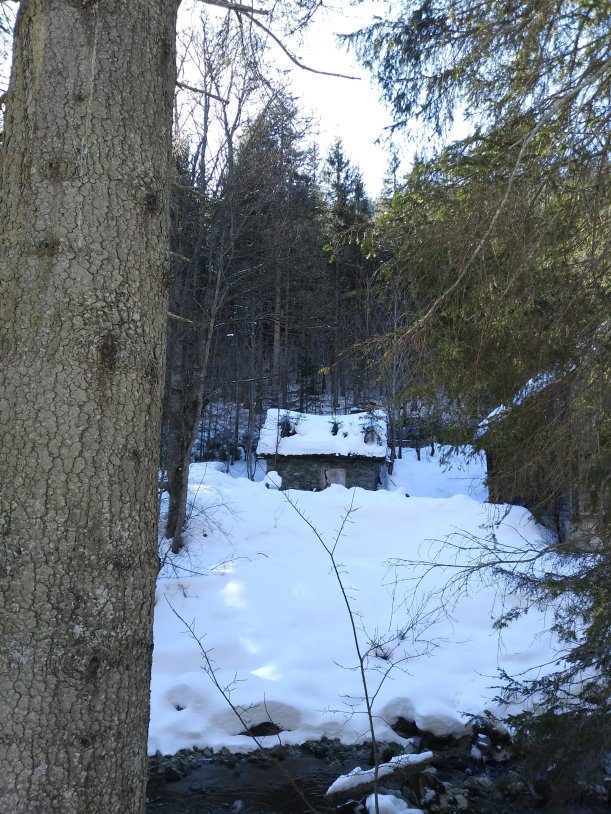 Its even got trees growing out the roof! Its next to a huge barn. Wonder what it was used for? 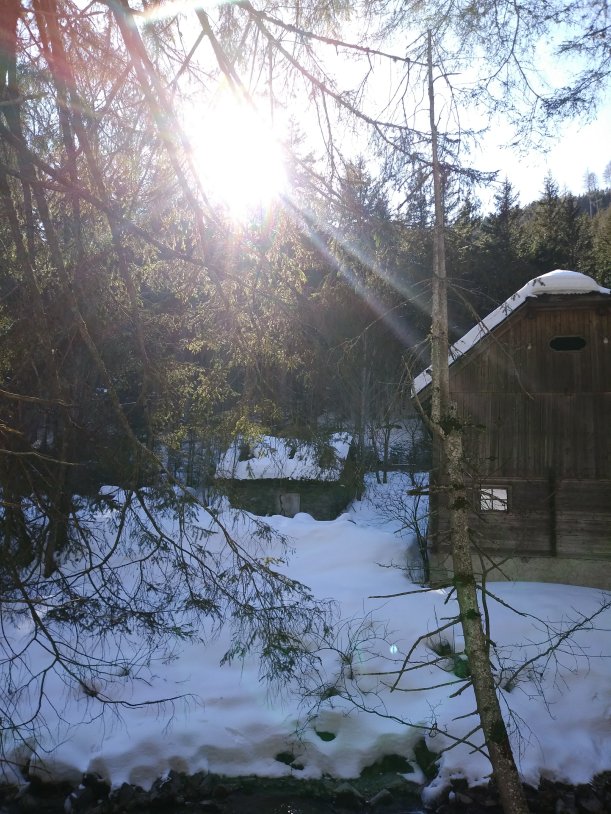 The house over the road had the biggest icicles I’ve seen in Lungau! 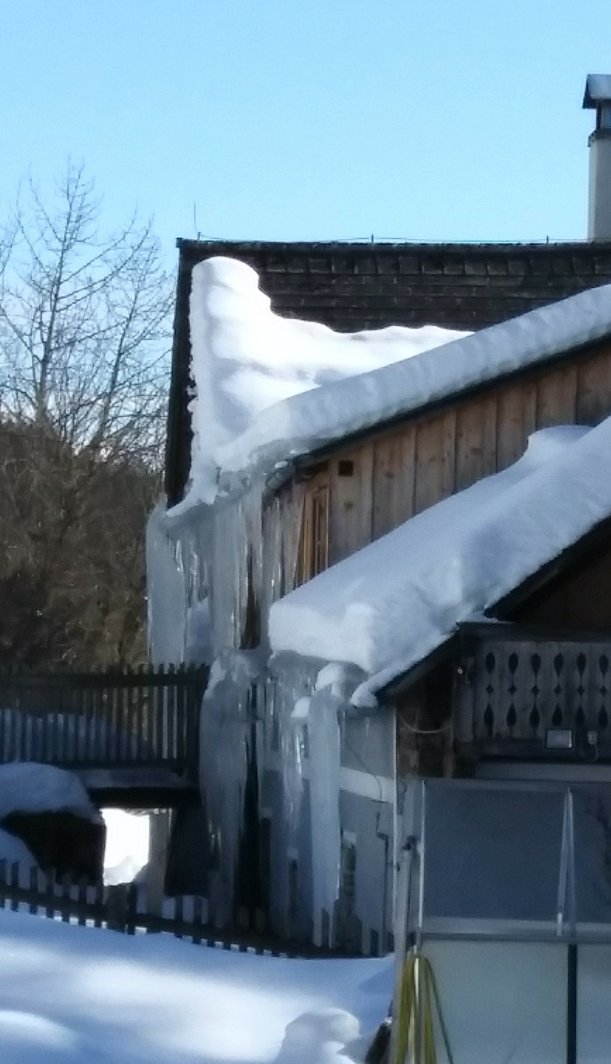 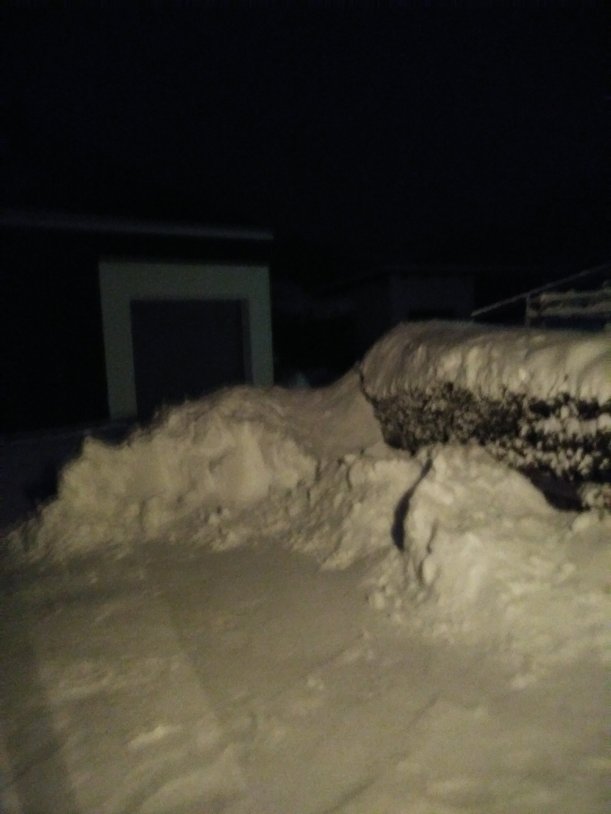 After our recent very heavy falls of snow, I was chatting to a neighbour and casually said,’I suppose this is how it used to be when Lungau was the Siberia of Austria?’ ‘No’ he said,’there was much more then.’ Staggered, I went home, shut the door, put the kettle on and realised,no wonder the older generation here is so totally twitched about snow clearing…….and was so grateful for Christian and his snow blower! 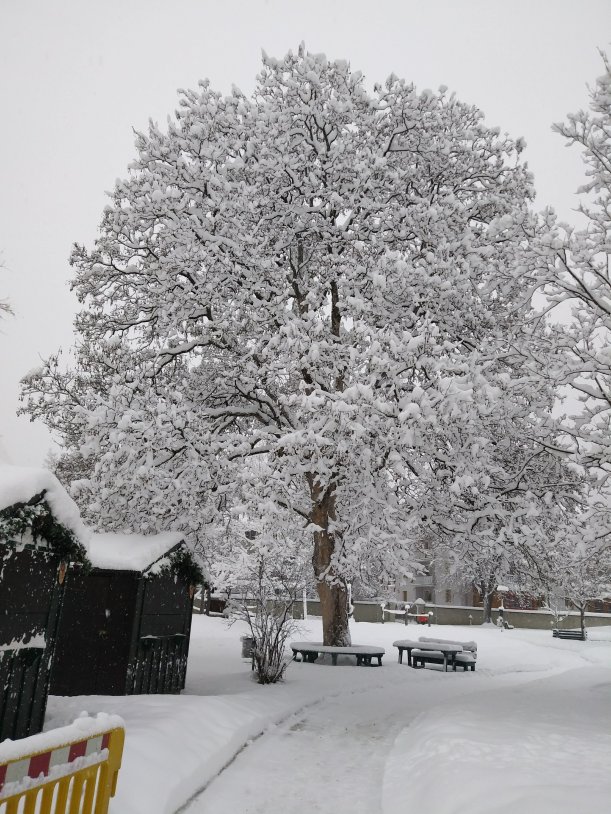 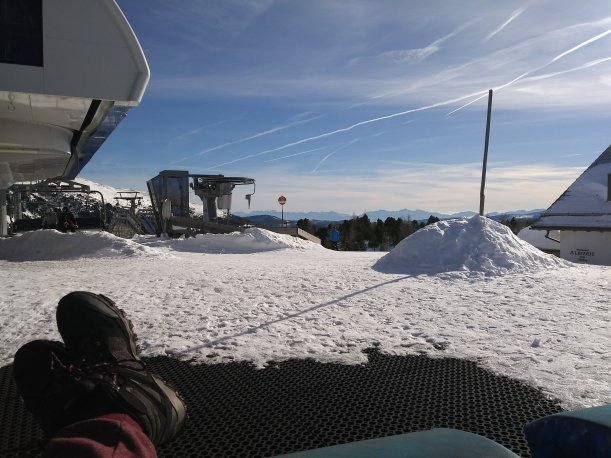 The past couple of weeks we’ve had family staying, and its been such a good time. 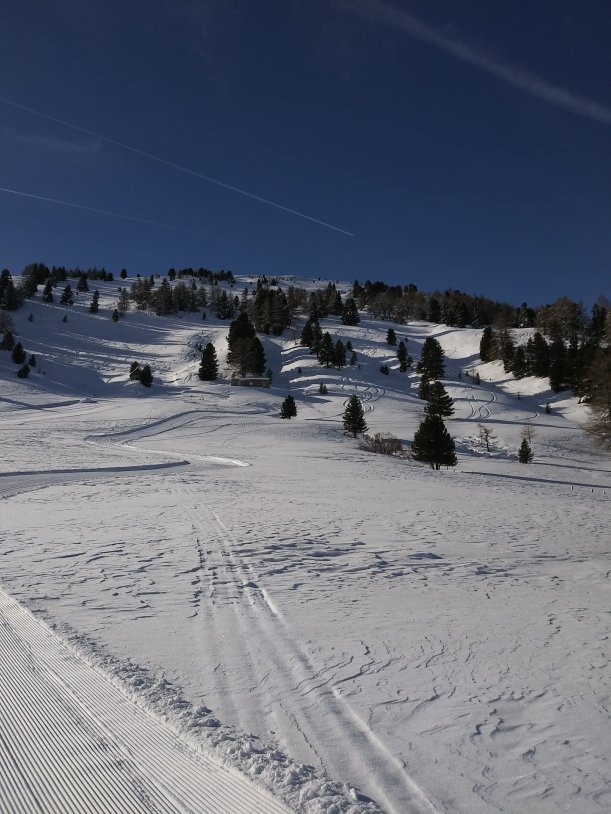 We’ve got out and gone to places we don’t usually go to, a real staycation! 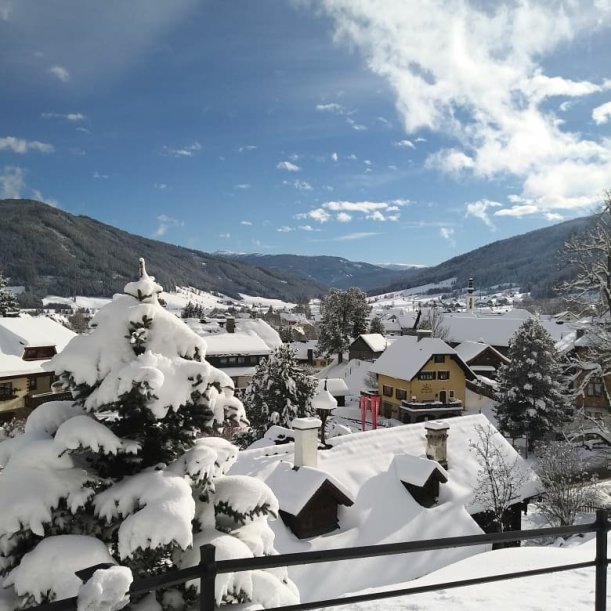 Now the main ski season is kicking off, score so far one bunged up washing machine, one frozen gate and a dishwasher pumping onto the floor…….roll on Easter. 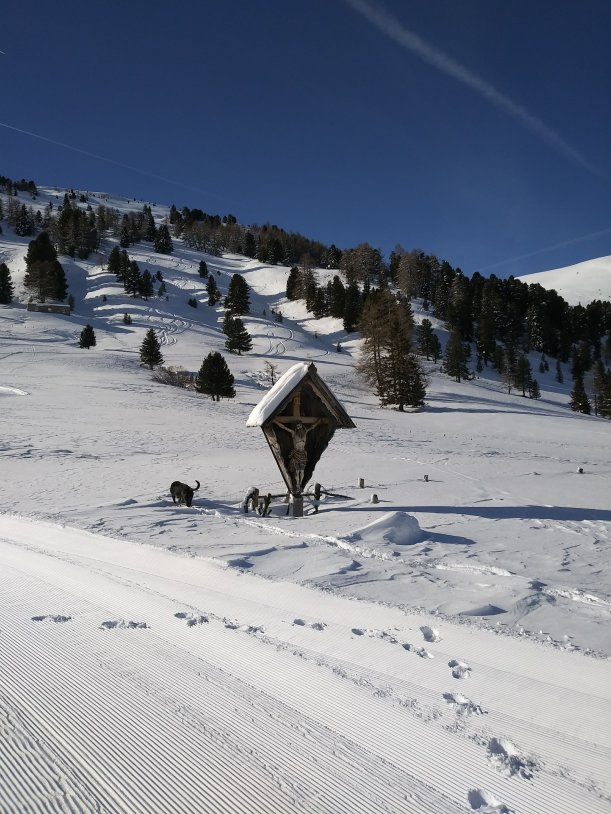 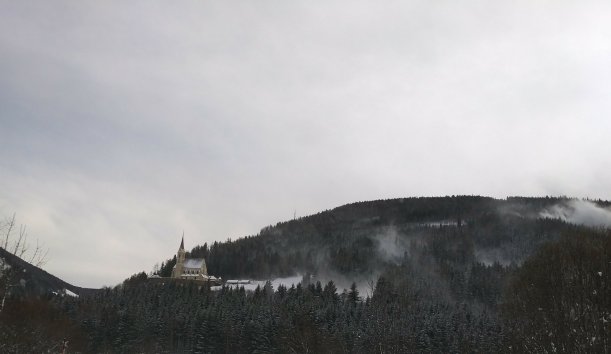 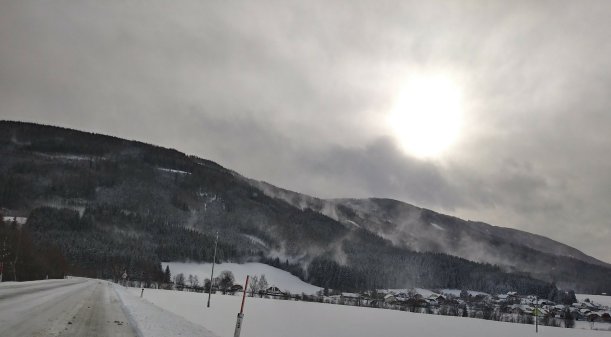 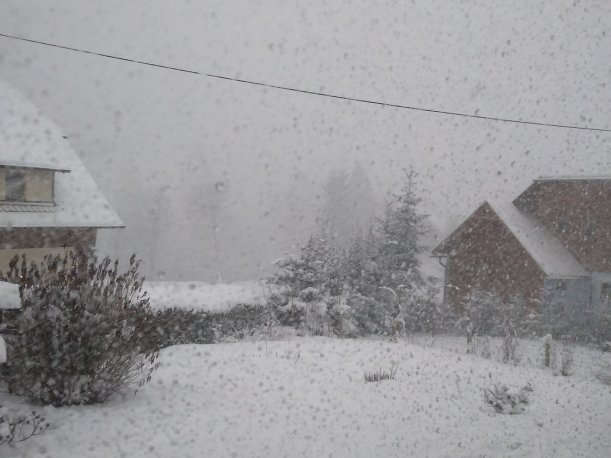 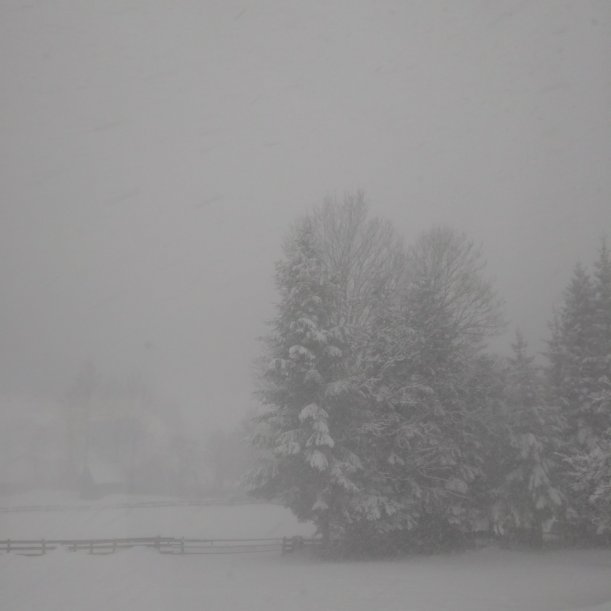 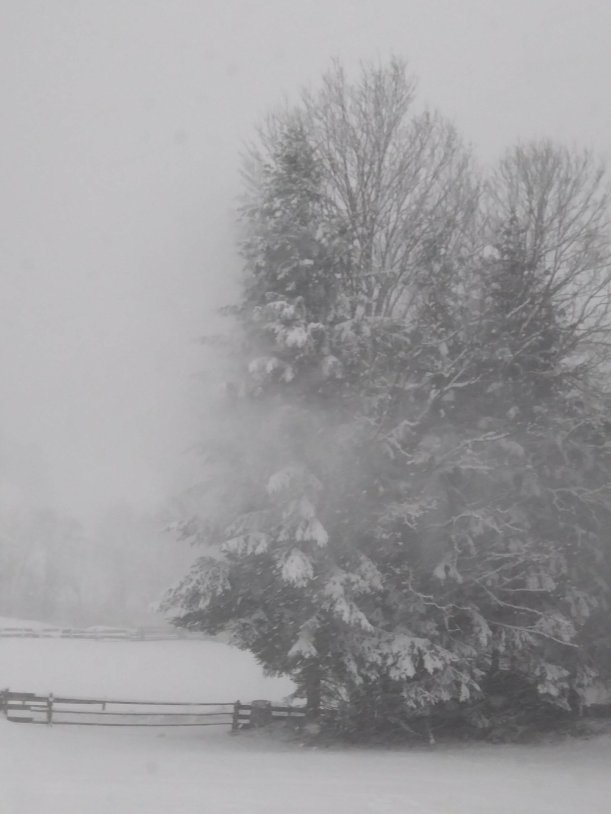 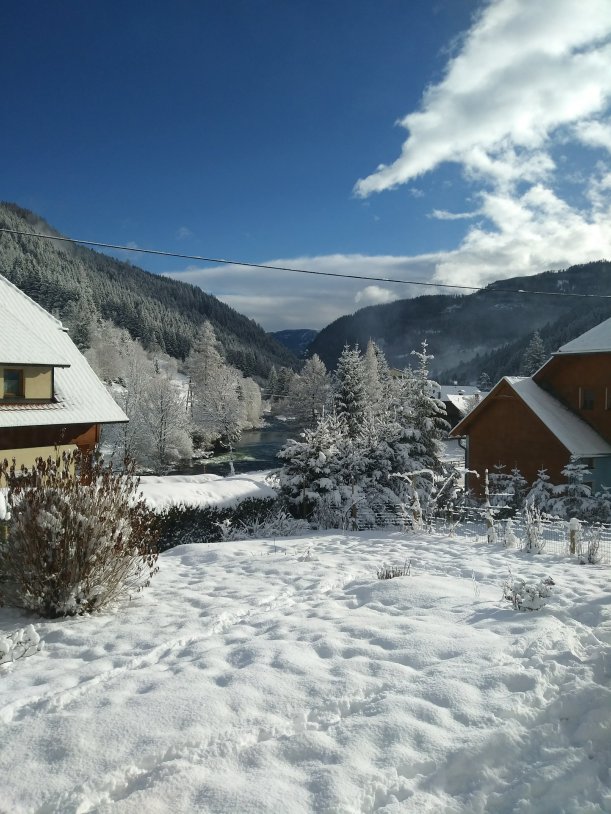 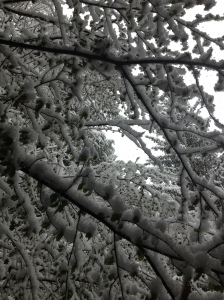 It’s not unusual to have a late fall of snow in April, but this year must be the wors and the lastest!  We’ve had several days of a really cold wind and snow showers, which stayed in the air, but the mountains got a covering and even Salzburg! Apparently it came over the UK from Iceland to us. And this morning we woke up to it laying, and as I write at midday we’ve had 25cm! 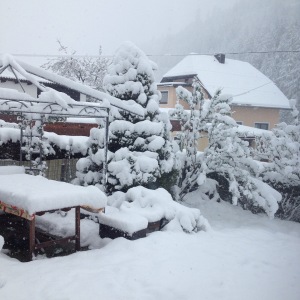 Yesterday it was all green and the cherries were blossoming everywhere, but the flowers were browning in the freezing wind. So I guess precious few cherries this year! Dave and I have covered all the plants in the greenhouse,so glad we hadn’t planted anything out!  We were quite smug too that we hadn’t yet taken the winter tyres off the car, meaning Dave was the only one to drive up the steep road to the Burg for work!  I went for a walk with Elke and her son, and we got frozen and covered in snow as it waited for the main tip when we were at the furthest point away. But the dogs loved it. Poor little Robert was fed up and even tried to get his Dad to come and pick him up! 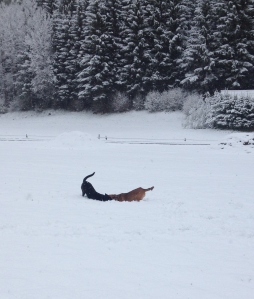 I was so glad that I’ve still got some bird food and could fill the table up, so many Chaffinches, bullfinches 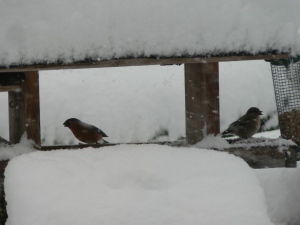 and the tits are fighting over it all as I write! 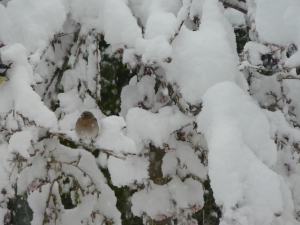 And it’s then going to freeze tonight. Sooner or later I expect Linda will be out with the snow shovel, I’m keeping below the parapet, it’ll be gone in a few day-won’t it????? 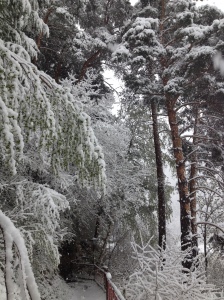