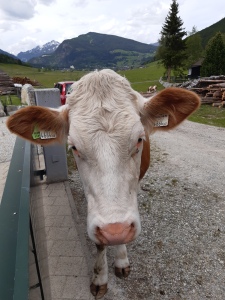 Here’s some cow shots to cheer us up!

How are things in your part of the world? This time last year, we were struggling with the effects of the heavy snow,floods and landslides that took out roads and some houses!

Here in Austria we’re a few days into a stretch that ends on December 6th. All shops are shut except for supermarkets, banks and chemists. Hotels and restaurants are closed too, but with a takeaway service.  My library is closed, but I’ve been in doing my annual chuck out of books. People on the whole are taking things seriously, we’ve had cases in the village this time, but not lost anyone. 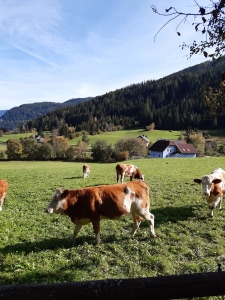 I’m quite happy, I’m just finishing a new book and the free time means I’ll get it out earlier than expected.

I’m tired of hearing the negative stuff about Corona, why would Governments want to destroy their economies? I see them as people trying to do their best in a no win situation. 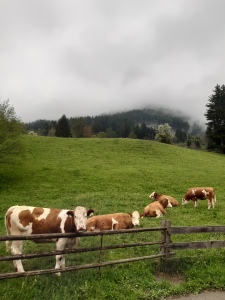 Can’t say I’m looking forward to Christmas without family, but at least we have zoom and other things. Roll on when this is all over. I have faith that God will see us through this, we need to trust and pray. 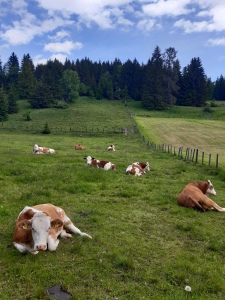 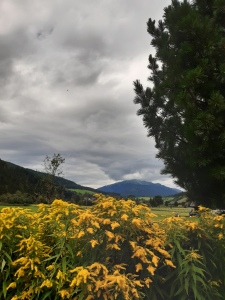 So far, our flat hasn’t sold, I like to blame the bug for that, and we have to make some decisions quite soon. If we expect to stay for the winter we’ll have to buy our wood and store it soon and buy new winter tyres for the car. September is being lovely which helps! 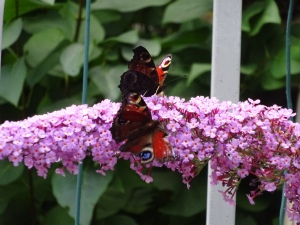 We haven’t been able to get to the UK because Austria is on the quarantine list, in that when we arrive, we must have 14 days isolated. How this is policed I have no idea but we would honour that. The one brief time where the quarantines were lifted, there were no flights. 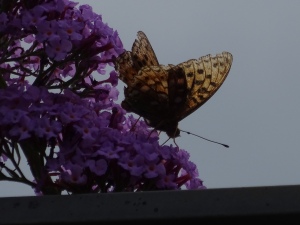 I really want to see my son as he has had some problems, and I miss my kids like a heartbreak. maybe I just need to see and touch, but it’s there. The thought of Christmas without either of them looms like a spectre. 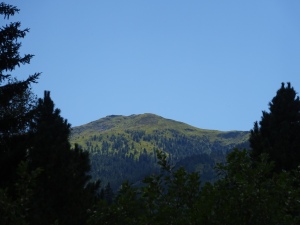 There is a glimmer of hope, if we have no bookings on the holiday houses, then we could do a trip home, driving, so Swingle comes too, shortly or just after Christmas, then we could stay a month and do house hunting too. 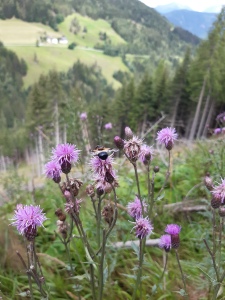 We’re both believing in God’s timing in all this, we’re praying for the person who will buy and keeping ourselves in belief. It just needs time. 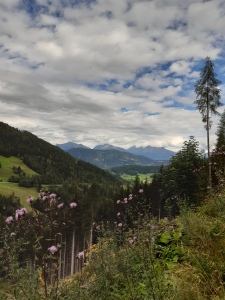 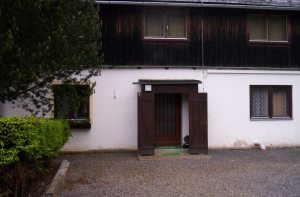 One of first reactions on deciding to sell the flat was to look at it with fresh eyes. There then followed a couple of weeks of re-painting, cleaning, packing up some of the DVDs and books that dominate the place. Trouble is now we like it all the more, but feel someone is just waiting to come and love this place too.

The only problem is that when there’s nothing on the TV, we can’t get the DVDs out to watch!!!!!

WOW! I’m the featured author in this month’s edition of Mom’s favorite reads, look at page 100!!!

Our gift to you, the February, Romance, issue of our Amazon #1, international bestselling magazine featuring

* A must-read interview for all fans of Sherlock Holmes

* Exercise, nutrition and wellbeing for you and your family

* Activities for adults and children 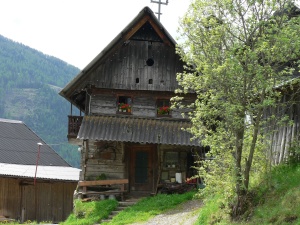 My absence from posting has been due to a really busy time and I rejoice in that. One of our little forays into the unknown has been volunteering in the village for meals on wheels and we’ve just had our second stint. I do find that right in the middle of the day, it really cuts into doing anything, but what ho! the fun supercedes this!  Dave has been under the Doctor’s knife so I found myself doing the first of the two weeks on my own.

The first time, the Landlady came with us and showed us the new clients who are scattered all over the village. Mostly pensioners and different stages of health. The first new house was a sad case of a man with cancer and on the oyxgen but friendly. His Mum gave me the why are you here in Lungau conversation but she was so sweet, in fact, I think she could do with the meals herself!  We then motored off to a couple by the Church, she’s on a losing diet, and he’s a typical Sergeant major, every time  I back along their little lane, he’s there waving me in and then making sure I dont forget the empty boxes.

Then came the interesting guy. Half way up the hill to Karneralm, he lives in an old farmhouse which we had though empty. The first time I was there, a couple of goats were bouncing around on the road! He has a funny manner and we were warned he is,’difficult’ . My second time, he wasn’t there, but had left a perfectly coherent note on the doorstep asking me to leave the food on the doorstep, I lost my fear of him, if he could so express himself.

A few days later, they told me in the pub that I had brought back a full box. I was so embarrassed. Then they said it was from the Wednesday so I realised it was from this guy, he hadn’t eaten it, and I had the note to show. Phew, that would have been so embarrassing!  Then the next time I was there, I got the abuse about the S&//$§t food, the rest was in dialect which I’m probably glad I didn’t understood. He had again left the food. When I told them so at the pub, they said he had earlier thrown the entire lot out of the window because he wants the eat, ‘Schweinsbraten’ or roast pork every day. The next time I was there he was more polite, I think someone had had a word with him.

We still have the original two, Mr Posch is often on the hill looking after his bees, we thought he was up there dead one time, but he was just having a doze!  He says its a bad year for bees but has promised me some honey -wow!

I think its such a gas doing this, one bonus was  when  I was by the church I met a familiar face, she’s a local artist and has said she will look at my miserable daubs and give me some tips – wow!

Then on my last day, two of the customers gave me a tip and a bottle of wine – I feel humbled!

Chris Herman and his wife Sue moved to Lanzarote in 2006. Chris is pastor of the Family Church, teaches languages and has written an amusing book Sandwiches in the Sun about their experiences.  He also hails from the same area and church in the UK as us!

Over to you Chris! 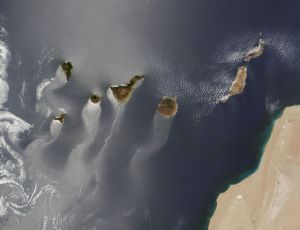 As we all know, the stress of work and other worries can often blind us to the beauty around us. That’s when some wise guy tells us to simply ” stop and smell the roses”. In my case it was the worrisome Spanish tax office that recently forced me to do just that.

In Spain, it’s not enough to simply pay your taxes; sometimes you get a snotty letter demanding you to prove it! Having received such a missive last month, I took an early bus to the island’s capital Arrecife. An hour later I arrived at the intercambio (interchange), at the near end of Arrecife’s long Reducto beach. As I strolled alongside the the lovely long stretch of pristine pale golden sand, and felt the warmth of the early morning sunshine, I marvelled again at the beauty of it all. So much so that I was almost thankful to the silly tax office for calling me in!

Having presented my documents, I returned to the bus interchange by the same route. The sand was now partly populated by little groups of sunbathers, and a large square white tent. Arriving alongside the tent, I found myself in a crowd of onlookers. There was some sort of filming going on. It turned out that the biggest department store in the country, El Corte Inglés, had chosen the most beautiful beaches in Lanzarote to film their publicity for the season’s swimsuit collection.

I commented to fellow bystander, “That’s ironic, since we don’t have one of their stores anywhere on the island!”

As I continued on my way back to the bus, I noticed a pleasant cooling breeze had come up, and how inviting the wide new part of the promenade was for an extended stroll, as it snaked away from me along the coast, behind the gardens that lay between me and the recinto ferial, the large square of tarmac used frequently for concerts and other events throughout the year.

I declined its invitation, having already enjoyed a good walk. Anyway, I was feeling in need of a quick snack and coffee, before I hopped onto the hourly bus back to Playa Blanca. Accordingly I kept walking straight to my favourite snack bar, just over the road from the bus interchange.

As I sat and chatted with the staff, they told me how the Canaries had just won a prestigious award from the viewers of NASA’s Earth Observatory web page. The photo I’ve included in this post had been chosen as the best one taken in 2013. As you can see, the islands appear to be swimming like a shoal of fish northwards through the Atlantic, leaving a frothy wake to the south.

That letter from the tax office was really unnecessary; and yet it was good to reflect again on the privilege of living in one of the most beautiful places on the planet. So thank you Hacienda (the Spanish tax authority) for summoning me to Arrecife!