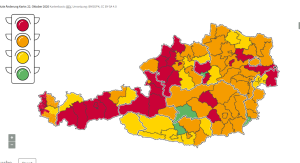 How are things in your part of the world with this annoying bug? We are ornate, just to the left of the big green bit at high risk, but not yet higher.

We now have two people interested in the flat. Our last sale fell through as he went on holiday and bought another place, not having signed the contract. We now have a lady from Styria who has been twice, but is very non commital when she speaks to us. And a couple we know, who work locally, are fellow Christians. They have given us the offer we want, but the Gemeinde is being sticky about it being their main residence. They will have a talk with him early next month.

Last night, we were shocked when we saw how Austria is turning red with Corona. Germany has put a warning on people returning, that they must have a test or quarantine. The Aller Heiligen going to the Graveyards church services have been cancelled. It seems the problem is people mixing in private and event, shopping and keeping distance is not the problem. There’s so much idiocy with conspiracy theories and anti government stuff. Can’t people see it’s a matter of self responsibility? I would be devastated to think I had infected someone who later died. Why are people so selfish?

So this all means, that maybe if Europe is more and more restricted, we won’t actually be physically able to move, Wales where we might go is locked down. The spectre of Christmas without family is looming.