I met Jan lately on my new Facebook Group, Horse Books for Grown Ups. If any of you are looking for such a read, or an author of such a book that you would like to promote, please join us! 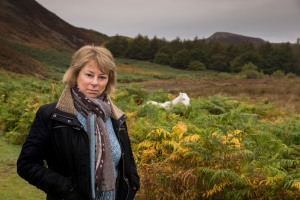 I live in Snowdonia, a mountainous area of North Wales, UK. I write contemporary fiction about the darker side of the family dynamic, often blending life in rural Wales with a touch of city business. My style is best described as fast-paced and realistic, with a sprinkling of dry humour.

The real story began at school, with prizes for short stories and poetry. I failed all things mathematical and scientific, and to this day I struggle to make sense of anything numerical!

My first novel – written in 1986 – attracted the attention of editor Anne Dewe, Andrew Mann Literary Agency, London. Dewe’s own company, Love Stories Ltd, was a project aiming to champion those books of substance which contained a romantic element but were perhaps directed towards the more mature reader and consistently fell through the net in traditional publishing. Summer in October was contracted immediately but sadly, the project failed to get the right financial backing and the company dissolved.

Many years later my second novel, Wild Water, was taken on by Jane C Judd Literary Agency, London. Despite Judd’s enthusiasm, the book failed to find the right niche with a publisher.

And then Amazon changed the face of the industry with the advent of self-publishing and I went on to successfully publish several works of fiction under my own imprint, Celtic Connections. After a brief partnership with Accent Press in 2015, I chose to return to the freedom of independent publishing.

Wild Water won the Cornerstones competition for the most popular self-published book in 2011, and Midnight Sky won the Romantic Review Magazine Award (2013). Silver Rain (2015) and Wild Water (2016) were both finalists in the Wishing Shelf Awards.

My books are available globally via Amazon as ebooks or paperbacks and locally, you’ll find them in North Wales libraries and Hinton’s bookshop of Conwy.

When I’m not reading or writing – I love to ride and walk the Welsh hills; a constant source of inspiration. I’m also is also an active trustee member for the RDA (Riding for the Disabled) and an Assistant Equine Facilitated Learning Practitioner.

I tell myself I’m taking a break from full-length novels but then find myself dabbling! No horses this time. Three sisters, all very different from each other and with a secret in the past which slowly reveals itself through a time-slip structure…

I’m also starting a new series on my blog called The Pony Diaries. I’ve recently completed a series of memoirs spanning 50 years of riding which has been wonderfully cathartic and a great way of collating memories, photographs, and re-discovering parts of my life I thought I’d forgotten. But I realised there was so much more I wanted to say. The Pony Diaries are a continuation of the memoir theme in a way, but where the memoir finished at 2018, the diary entries will be written in a more immediate form.

My most recent novel is Gift Horse.

Imagine living eighteen years of your life around a mistake…
Caroline Walker’s daughter suffers a horrific riding accident. Her distraught parents wonder if she’ll ever walk again, let alone ride. And when Mollie’s blood group is discovered as rare, her husband offers to donate blood. Except Ian is not a match. In fact, it’s unlikely he’s Mollie’s father.

Caroline turns to Rory’s friend Connor; and although his almost spiritual connection with his horses appears to be the balm she needs, Caroline cannot forget Rory, or her youth – both lost to a man she never loved. Eighteen years on and after surviving cancer Rory lives as a virtual recluse in the Welsh mountains. Through his well-meaning but interfering sister, he is shocked to discover he has a teenage daughter. Or does he?

Where do you get your ideas from?

Even if I tell myself I’m done with writing for a while – and I do, frequently – something will eventually worm its way out of my subconscious. This mutation of daydreaming is often coupled with observations of other people and happenings in their lives, as well as my own, until eventually all of these considerations are pulled together and mulled over, like some sort of fictional tombola. And for me, it’s those personal stories which add an extra layer of reality to a work of fiction. Write what you know is all about understanding your subject thoroughly, and preferably having experienced some of it first-hand.

I’ve been working with disabled people through my local RDA (Riding for the Disabled) for some eighteen months. Then earlier this year I was offered the opportunity to train as an assistant to a therapist working for WITH (Welsh Institute of Therapeutic Horsemanship). This is all about people with mental health problems, and the astonishing success of equine therapy relies purely upon the interactions between people and horses. I hope my modest experience adds a touch of reality and richness to the story of Gift Horse.

How do you work?

I’m an early morning writer. I tend not to plan too much, other than factual things like dates, and timelines. And I don’t have a messy desk with endless notes stuck to my screen or big notebooks overflowing with complicated scribblings. What I do have is a good instinct for the order of things. I think this comes from reading a lot of good fiction and learning why and how something works; what to hold back, when to reveal, how much to tell, what to show, which scene works best as dialogue, or narrative. This balance will be slightly different for every writer, the literary stamp of personal style?

This is a tough question! I’m going to say The Misremembered Man, by Christina McKenna

From Rat Race to Road Trip With Four Dogs!