I’m thrilled to have Georgia here today, I guzzled her Grayson trilogy and then we got chatting, we both like to plot dog walking!!!!!

Georgia Rose is a writer and the author of the romantic and suspenseful Grayson Trilogy books: A Single Step, Before the Dawn and Thicker than Water. Following completion of the trilogy she was asked for more and so wrote a short story, The Joker, which is based on a favourite character from the series and the eBook is available to download for free at the retailer of your choice.

Her fourth novel, Parallel Lies, encompasses crime along with Georgia’s usual blending of genre and its, as yet unnamed, sequel will be out later this year.

Georgia’s background in countryside living, riding, instructing and working with horses has provided the knowledge needed for some of her storylines; the others are a product of her passion for people watching and her overactive imagination.

She has also recently started running workshops and providing one-to-one support for those wishing to learn how to independently publish and you can find her, under her real name, at http://www.threeshirespublishing.com.

Following a long stint working in the law Georgia set up her own business providing administration services for other companies which she does to this day managing to entwine that work along with her writing.

Her busy life is set in a tranquil part of rural Cambridgeshire in the UK where she lives with her much neglected husband and dog. Their son, currently at university, comes and goes and their daughter, having delighted them all for long enough, has eventually moved out, married, and will be making Georgia a grandma in a few months.

How did you get into writing, how did you find success?

I’ve always written and remember starting to put together a rudimentary book on all the different breeds of horse and pony when I was about ten. I think I got as far as completing the native breeds before realising I needed photos and, remember this was well before the internet or any type of digital photography was possible, I never got any further.

However, after making many more attempts over the years I eventually started putting together an idea for a storyline while on holiday in 2012. I focused on producing a book that I would want to read so imagined a fabulous setting which had to include horses, a very special dog and strong characters. I added tragedy, mystery and suspense and in the later books adventure and a thriller element. It’s no wonder I have such difficulty putting my books into a category! Anyway, for a variety of reasons, this time it all came together and The Grayson Trilogy was born. If any reader that comes this way fancies the sound of this A Single Step is currently free everywhere so, please help yourselves. 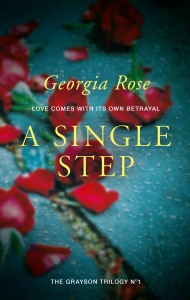 Success is all relative, isn’t it? When I first published I decided that success would be getting a review from someone I didn’t know. I can still remember the moment that I did, it was exhilarating. Then it became about earning enough from my books to pay for the production of new ones. Now I would dearly love to sell enough to have a little bit left over after all the expenses. Time will tell on that one.

My latest, and I believe my best written, work is Parallel Lies.

A woman with a hidden past. A new love on the horizon. Will the truth set her free or cost her everything?

Madeleine Ross has meticulously organised her world to leave no trace of her criminal past. After creating a new identity for herself, her only remaining connection to her previous life is the security work she does for a small-town insurance company. But when she starts falling for her handsome boss, Dan, she’s worried letting him in will expose secrets best kept locked away…As their attraction grows stronger, Madeline’s attempts to keep Dan in the dark go horribly wrong when a dangerous ex emerges from her unsavoury past. After her former flame makes her an offer she can’t refuse, she has one choice left: ditch her life as a thief to let Dan in or embrace her shady dealings and destroy her only shot at a happy future…

Parallel Lies is the first book in a fast-paced romantic suspense series. If you like troubled heroines, character-driven action, and powerful emotions, then you’ll love Georgia Rose’s thrilling novel.

I was delighted to receive this written in a review, it sums it up perfectly!

‘For those who admire character-driven thrillers, who can handle brief but shocking violence, and who enjoy beautiful writing’ Barb Taub

How on earth can you choose a favourite book?? That’s like choosing your favourite child. I have delayed and delayed finished off this post as I simply can’t decide. It depends on so much, place, time and especially mood.However, I was reminded of a favourite from long, long ago the other day and it filled me with warm fuzzy feelings so for today, this is it. A Woman of Substance by Barbara Taylor-Bradford. I still have my old battered copy, and no I have never seen the film, I don’t do that. Love the book? Don’t watch the film.

I thought Emma Harte was incredible (and yes, I’ve only just realised that I called the heroine of my trilogy, Emma!). I loved the way she pulled herself up from nothing to become this inspiring business woman and I remember loving the business she set up, and all the detail surrounding that, that showed off Emma’s passion. Fabulous! I haven’t read it for probably a couple of decades so I do wonder what I’d make of it now. I’ve also just found out that it is book 1 in a 7 book series so perhaps I should revisit.

Thank you for inviting me to appear on your blog, Anna. I’ve loved visiting and appreciate the opportunity.