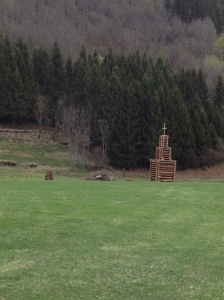 I’ve blogged about this local tradition several times, there’s a link below. This year, things are changing. Some bright spark built one with a star on it last year, so now people are building them five sided, one a twist and like the one above, rather than a straightforward  tower.  They’re usually built by the Land Youth group, very efficiently with chain saws and hoists and plenty of beer. But this one below, was built by a local family, a real wonkey donkey, but I guess some kids had such fun making it.

And here’s the one from Ramingstein. Since theirs was burnt down two years ago, they’ve left it later and later, as I write today on Maunday Thursday, its still in flatpack form!!

It also means that everyone with trees to chop down have had more time to dump them here! Its been really dry the past couple of weeks, and  windy too, resulting in a fire by the railway this week. It makes me wonder if there will more call outs this Saturday for the fire brigade!

One thought on “Easter fires”