I was wondering what weather this winter would bring, and while there is a lot of ice about, the little amount of snow here is melting around us as I write on February 1st. Its been cold as usual, and we’ve had rain as has been the trend for the past few years.  I’m happy as I’ve been able to dog walk with relatively little peril, especially as I now have shoes with retractable spikes! It rained this weekend and once again our yard was like a skating rink. But it has meant the ice on the lane has melted and I don’t have to worry for Mr B making his daily way across it. We haven’t had the snow shovel out once.  I’m just hoping we don’t get another load of snow in March like last year just after we got Swingle.  There’s been very little rain or snow which had the hill farmers moaning before Christmas, and where I’ve been measuring the Thomatalerbach, its been steadily low the whole time.

Skiing? The season started with streaks of man-made pistes down the hills and accidents galore when people went too fast or off the edges. There as a good bit in the middle, there were some spells of -12 a couple of weeks ago, and where the Mur is so low, it actually froze across for a couple of days. But all our friends say its been awful recently as the snow is turning to slush by middle morning, and sections of runs are ice.  The rain means the avalanche warnings have all been raised. At least its an early Easter this year. 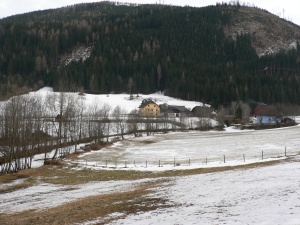