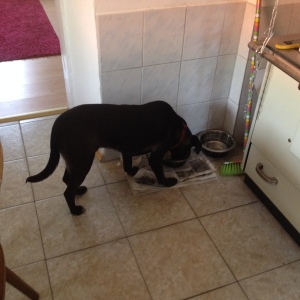 I’ve long wondered about the rightness of this as a dog food. Several dogs I’ve known on it have profound gas problems, and our Swingle won’t eat it unless starving. In an attempt to encourage her, I soaked some and was astonished that it nearly doubled in size. Everyone says its ok, the dog just drinks extra water. I’m not sure that its fair to feed something that expands so much on contact! Of course, I used to feed dried sugar beet to my horse, which had to be soaked and that could get up to four times bigger.  I even found an exploded mouse that had tried it dried! All horse owners worry about colic where dried food gets washed into the wrong part of the stomach if the horse drinks too soon after eating.  And dogs are differently built. But even so, is this all just a convenience, has anyone ever looked at the long term effect of this food on kidneys/overall digestion?   Aren’t dogs Carnivores??