We had long known that we would have to put a fence around our garden in the event of a dog as we’re about 25 metres from a main road. And we should have done it BEFORE we got her, it would have made my life much easier! We also have fussy farmers who get stressed if there’s a dog on their precious hay fields.

So, with Dave over his bug we set to work, putting in tall metal fencing along one side, chicken wire along the hedge and building gates at each end.I say we, I was there, doing what I could -honestly!!!

Swingle spent the whole two days with us, helping remove pieces of wood we needed, digging bomb craters in the veggie plot, and running us ragged. I also took her our for a short walk up the lane. Result -when she came in with us at about 5, she collapsed in a heap, then forced some supper down and then slept practically through until the next morning!

As I write,we’ll have had her four weeks on Thursday. House training, nearly there. She thinks its a huge joke to bang on the door at 4 a.m and then refuse to go out. She now comes into the bedroom for while before we get up -moving herself up the pack. She actually chased her tail today, and has discovered the joy of barking at all and sundry. We’re trying to stop the baby nipping and jumping up. She knows down and sit. 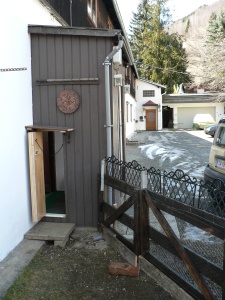 And today, to my joy, the dog door is going in the porch. NO more standing in my dressing gown and  jacket in the cold, just open the door and let her go-luxury!

2 thoughts on “How to tire a puppy”

From Rat Race to Road Trip With Four Dogs!