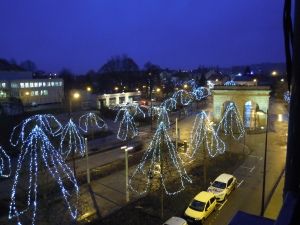 I had a complete freak out spell the night before we left and just didn’t want to do this mammoth drive. We do bicker a bit (!) in the car, so we had to agree to man up and behave. The route was mapped and we had a Tom Tom, and  Salzburg, Munich, Stuttgart, Karlsruhe, Paris, Caen, Cherbourg really looked simple. I also had the carrot of the family and Christmas being at the other end, so I went for it.

We left as agreed and it was fine as we headed towards Salzburg. We met a lot of traffic at Munich -someone had told us about how they opened the hardshoulder to traffic in rush times, so we didn’t freak out when we saw all these x’es. We also soon got the nack of the slow lanes going up hills for heavy vehicles in France. Trouble is the lanes peter out at the top in various ways and you have to get your lane right. The worst time was when I was overtaking and a lorry decided to overtake another just as I was going by – they often followed me out as we went past.

Then the motorway tolls in France, we still haven’t sorted out what they cost, but it did mean really good roads, most of the roadworks were in Germany!  We soon got the hang of either collecting a ticket or slinging the card in and burning out- Panda liked racing the lorries away…..

It was getting to about six oclock and we were tired, we had reached our goal of doing over half the distance. We needed a hotel, but we found that there are no motorway hotels in France, just the ‘Aires’ which are dirty bogs and a park place. We pulled into a rest station and they had no idea, but suggested Verdun – a first world war town with huge cemetaries and hotels as people were in and out all year on tours. ThomasT guided us into the middle of the town, and after a bit of bickering and bad road signs we found a place- we fully expected Rene Artois and Edith to be there! It was interesting how my French started to dribble back, the receptionist was a giggler and I heard her snigger as I said tuoisieme (sp) meaning the third floor as we staggered up the stairs.

After Croissants for breakfast, we hit the road for Paris and then we hit the Periperal. Oh heavens, joining, twisting back on yourself, but the traffic was mostly good tempered and I actually began to get a buzz out of the driving. As we reached the peninusala of Cherbourg it became very windy. We began to wonder if the ferry would be cancelled. The landscape was a bit like around Wareham, flat water meadows, but earlier, Normandie had looked really cute with lots of half timbered buildings.  World war stuff was all aorund us. We made the port with an hour to spare -phew! We’d done it and were still speaking to each other!