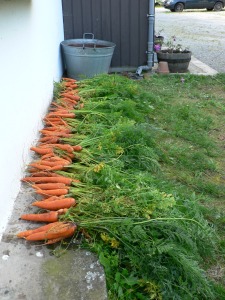 Following a warm and damp winter, we’ve now had a warmish and damp summer. The neighbours are blaming us, saying it came from England – and some of it did!!!!  There was one time in late spring when temperatures got to the low 30s,and today, August 30th, we have all the signs of an early autumn. We’ve harvested the carrots, as the tops were turning, but what a crop!  The parsnips are looking good, but they need to wait for the frost to sweeten them up. We also had loads of peas and broad beans. The courgettes and Okaido pumpkins haven’t liked the colder nights, and have slowed right down in growth, and the strawberries were lousy. The sweetcorn may not ripen with the continuing rain, we’ll see.  BUT loads of redcurrants for a first attempt at wine, and blackcurrants for jam and liquor. Such a difference form this time last year when the whole valley was drying up.

The geraniums haven’t liked the damp and cold, and have reacted by going nuts in their flowers, here another example of a white plant bearing a red flower. 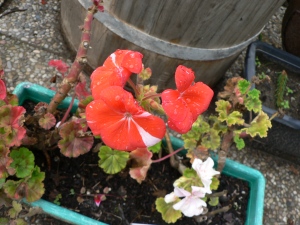 The summer has still gone too quickly. Some of the sycamores are starting to change. I don’t mind a early autumn, if we get snow in November and the crisp dry cold, rather than the soggy dampness of the past few years that went straight to Dave’s chest.

But it’s been an unusual summer. The hay crop has been rained off several times. Cold nights in August.  Sooo much rain. So how has your summer/winter (for those in other climes) been? 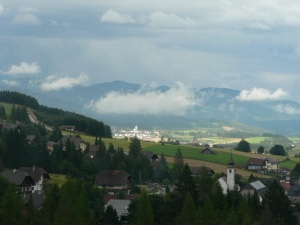