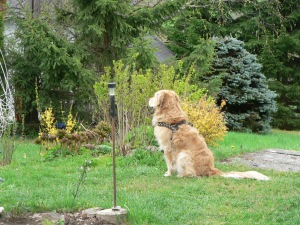 I recently had another dog to look after for a few days and it was great to have a hound about the place, but it brought it to me what sort of dog I’d like permanently, and just how we need to fence in our garden!

Shira is a very laid back, maybe typical Golden retriever, perpetually hungry, eats anything, but just loves a cuddle and a scratch. She’ll crash out in the garden if we do stuff. Occasionally practises her bark too. Out walking she trots along purposefully at a reasonable speed and doesn’t pull.  If  let in the water she’ll splash and then come out and wriggle on her back to dry herself off- once I thought she would roll back in the river!  An easy loving dog.

Sina is a Munsterling – a German hunting breed, which to me looks like a springer spaniel. I was warned not to let her off the lead as if she gets a scent she will disappear. Not bothered that much about water, but she usually burns around following her owner who rides.  Pulls like a train, barks at any new sound,  affectionate but not so loving as Shira and more picky over food! Refused a chew Shira would have guzzled. But intelligent, she quickly sussed that she had to only come and look me straight in the eye to get me to take her out for a pee – Shira has a better bladder. We adopted the system of putting her on a rope in the garden and she loved that, but I didn’t like it. The worst was the fine back hair all over the house, had forgotten that! Shira despite having more coat, doesn’t seem to shed so much.

My perfect dog? Somewhere right in the middle with a short coat!  Who is your favourite dog?