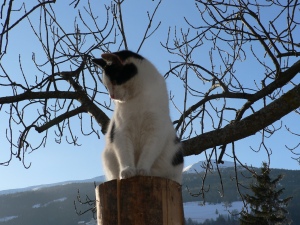 Picture of a Moggy as I haven’t one of Mr Forcher!

One thing we missed when we came here was some aspects on UK television.  Being huge fans of Time Team, and that not usually available on DVD meant we missed Phil and his trowel. Austrian TV is full of American stuff, dubbed so quickly   its impossible to understand.  Some programmes we love, such as  Musikantenstadl, an Austrian version of Saturday night at the Palladium.  Klingendes Oesterriech.  Presented by Father Christmas Lookalike Sepp Forcher who presents random music groups singing and playing on the alms (we’ve never found any, so don’t know how he does!). There’s also a Home buying programme, where mostly gay folks and wannabe actors/singers pretend they want to buy a flat which usually has white walls and light laminate floors, I’m so glad to be able to watch gems such as Homes Under the Hammer again…..it was programmes such as a Place in the Sun which possibly triggered our move!

We resorted to DVD buying and when we go back to the UK, even enjoying the adverts.  Sad!  But the evenings are long here in the winter.  Then we suddenly found we had English channels, all of them on the satellite.  Somewhere must have switched off analog so the signal is now stronger. Admittedly when it snows or rains they flicker like mad, but we’ve ordered a signal booster.  We’ve now got about five years of repeats of our favourite programmes to catch up on.

I’ve moaned at Dave for  ages for watching Shy News, saying we don’t live there any more, put the local Tv on.  Then I caught myself watching the early evening news on BBC South.  Sally Taylor, still the same as when we left.  News that had little or no relevance to us.  I freaked out.  Where was I? Back in the UK, should I be there? Was Austria losing its hold on us?  This juxtaposition of the two worlds, being here and watching my old home felt so wrong.  I can’t explain it.  I had that awful tightening in my stomach of homesickness.  I kept telling myself, you are going back, at Easter and in May for the wedding.  Even so, I wont watch it again.