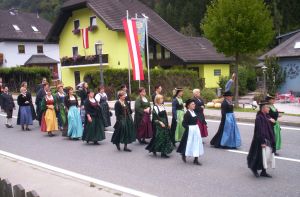 I’d made one outing with the Trachtenfrauen as I’ve detailed but really wasn’t too happy with my Dirndl and the ceremony.  So I waited until the Swapmeet in September where second-hand outfits are for sale.  I was there for nearly three hours struggling into different dirndls. I found one genuine Lungau but it was 250 euros, not quite my budget!  In the end I settled for one with a red bodice for 60 Euros, not the real Lungau one with black decoration but one that is a fairly common design. I even lashed out on a jacket, which was a wise move as the next outing was cold and windy. 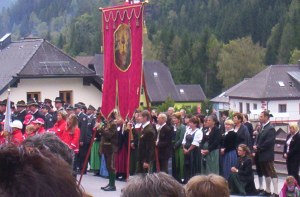 This was the 20th party for the Ramingstein Samson, there wasn’t a lot of marching but all the Lungau Samsons were there and had a dance. There was the usual men of the village fighting for the microphone and blithering on, then we went to the local pub, where the schnapps and beer began to flow. I tried to buy a round, honestly, but never got a chance! It was a great time to chat and get a bit wobbly. I also found out that our group is only two years old – hey a new tradition!

The next outing was Harvest festival, and they had the cannon out again, shredding my nerves.  We had a service in the church, with gifts taken to the altar, and another march around the village and back to the church.  The Priest again carrying the Monstrance right in front of his nose.  Then back to the Pub garden and more microphone snatching.  It was nice that as part of the festival, all those who had round Wedding anniversaries were remembered. Trouble is, Austria has been hit by the Data protection idiocy and may not be allowed to reveal these highly personal details in the future.

Julie Andrews eat your heart out!

We then had the David and Goliath fight played for us.  As far as I can see, this is to encourage people that the little man can win.  They must have had the same lad for several years but he had grown and was as big as Goliath.  We all fell about laughing when he completely missed Goliath with his  Bommyknocker and shouted ‘Scheiss’ forgetting his microphone! 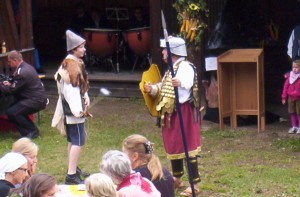 Then the Volkstanzgruppe had a dance, similar to our Maypole dance.  Another great event, Dave took loads of photos which I sent to the secretary who was thrilled as it’s not often there’s a shot of everyone together as she takes the piccies. Our next outing will be Icestockshiessen in January.  Maybe Dave will join the group as photographer, but he’ll have to wear a dirndl! 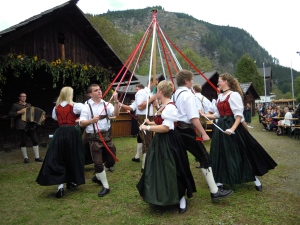 The world is best viewed through the ears of a horse.