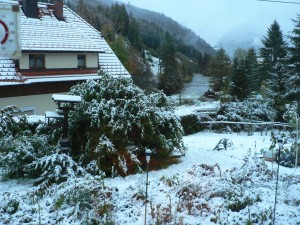 Yuck, and there was more to come!

We knew some snow was due as a kindly cold front was blowing our way from the UK.  As we left Keep Fit, it was sleeting, so I thought, here we go!  At about 5 a.m, the phone tinkled which is the sign the electricity had gone off, and it kept coming on and off for the next couple of hours. It was dark outside as our street lamp had gone off, but I could see the glow of snow on the hill behind us.  Daylight showed a heavy fall of about four inches of heavy, wet snow. The garden flowers flattened and the Sun flowers felled.  I gave the birds extra seed and we had to go into Tamsweg.  So many deciduous trees still glorious in their autumn colours now bent  over, broken branches lying along the road.

Now I know why the sunflower seeds are going so quickly!

It was too early for the streets to be cleaned as I dropped Dave off, and I had to wade through the slush to the shops. Some shopkeepers were clearing the pavements with the  snow shovels. Suddenly, all the worst that winter means came back to me.  Wet feet= I didn’t have my snow boots on. Slipping and treading like a Pensioner without my snownails attached to the boots (although this was only slush).  That cold nip in the air. Dachlawinen – lumps of snow and melt falling off roofs as you walk along.  How dark it makes it in the morning as the cloud and snow almost seem to absorb the light. How the snow encroaches and covers the world, almost like a personal presence.  And since March I’d forgotten all this.  This snow at its worst, damp and tiring to the spirit.  Too early and its so unwelcome, maybe because its out of context, I’m still geared up to the autumn colours and walking in the hills -that’s out probably till next year now. I’m glad that this lot will melt by the end of the week, once we’ve been through the process of frosts, longer nights, regularly lighting the fires, the trees becoming bare, I’ll be ready even excited for it, but not now.

I know its blurred! However, just look at the cute white tummy!!!!!!

As the snow melted, all around me was the sound of it running down the metal drainpipes.  In spring to me this is a great sound as it heralds spring, but now, wrong.  Why am I reacting so fiercely to this?  Most strange.  Or is it a forewarning of hard winter to come?