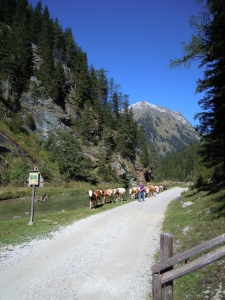 September, the cows are coming home

It’s been quite a while but I’ve given into the drug,and I’m back to Blogging. Dave let his job at the garden centre and so I was immediately unable to sped so much time writing! I must say though, we’ve done a lot of walking and been busy in the garden and so on.

At the same time I was blogged out, I felt I had nothing to say. Maybe joining the Postaday idea and keeping to it was a mistake – and I must say, I’ve seen a lot of blogs that have the logo and don’t including the Daily Post itself. What value did the virtual world I was creating have?  Only two people commented on my taking break. How many folks join a blog but rarely read it? I’m guilty of that.  I think the ‘likes’ tell it all.  I’ve kept the photochallenges up because they are simple and quick, but their viewings are dropping.  If you don’t get an entry on very quickly after the challenge is set, you get less views as time goes by. You see I’m still hooked as I check the stats!

I get a view into other people’s lives through the  blogs I follow, but they don’t know me, or me them.  Dave says all this is virtual net curtain tweaking, being nosy into other people’s  lives. Maybe so, but some of the blogs are fascinating and very well written.  Maybe its a case of keeping a perspective, and in the winter I will have more time.  My goal this year is also to try some watercolour landscape paintings.  I’ve felt released by my break, blogging was taking up too much of my time.

I’ve been a compulsive diary writer since a child and have kept the private one going all this time. That could be another blog – but would have to under a different identity!!!!!! I’m going to blog now when I feel like it.  There are so many challenges around now, you could fill your whole week doing them, its not for me.

HOWEVER!   Most of all, my time has come.  There are huge changes afoot in our local Christian community. After five years of learning, reading, becoming patient, God has let me a couple of times take my brakes off and its been full-blown, outright working for him.  I will have to find a way how to chronicle this.  This is the most important thing in my life from now on and maybe as I detail this, my blog will be a small witness also to the world and how Christianity is growing in the Lungau………but I will also have to tell you just what that Wuehlmaus got up to in my garden and the Trachenfrauen and the walks……………..

6 thoughts on “Back again!”