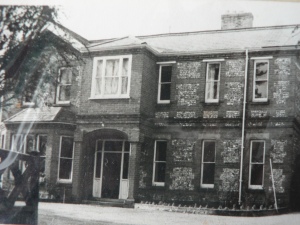 This is the house where I was born and when I am worried and something plays on my mind, I dream I am there.   I don’t dream of it so much now, because it probably wasn’t the safe place I thought.  But very often when my brothers and I are together, it gets mentioned.  Their memories are different from mine, they are almost a different generation. The porch has been demolished since the 1970s, and my childhood bedroom is behind the curtains,maybe I’m there inside, I wonder why it was knocked down?  I used to be woken as a child by the Screech owls but found the light from the lamppost just outside this picture a huge comfort.  One night I awoke with a moth on my arm, never forgotten that, I wonder how old I was? 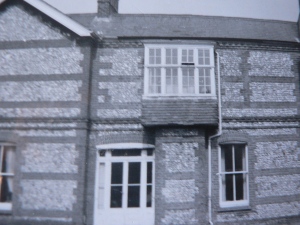 The bow window of the bedroom where I was born

To anyone looking at this, it seems just a brick and flint house, but to me it seems so much more.  I wish I had a photo of the stable block at the back, all the fittings had been ripped out but the cobbled floor remained.  I reckoned that one side was a loose box and a stall, the other was the carriage house.  It was so much in my imagination to see it as it was.  The yard used to be cobbled and the old, brick walled muck heap was still there, along with a loo, no doubt for the servants that never worked.  At the back was a large garden and orchard, all very typical Victorian, and the remains of a demolished greenhouse.  A yew hedge divided the working garden from the formal garden.  I used to play for hours at being a rich girl with loads of horses to ride in her stable!  Above the stable was what must have once been a hay and feed store as there was an opening for a hoist, and maybe another room for accommodation. Its been long converted into a house, but I wonder if the ghost is still there?  My brothers said they had a séance there once and one corner of the room felt ice-cold and they ran.  One day, when playing alone, I knew I was being watched, and it scared me so much, I rarely went up there alone again.

I could write out a guided tour of the house, but it means most to me, and sometimes when sleep escapes me, I go around the house in my head. My deepest place in my heart and I know I’m repeating myself here, is of the Cherry tree in the garden and its abundant pink snow in spring.  It would be really great if someone who lives now in the house, which is flats, would pick up my blog!