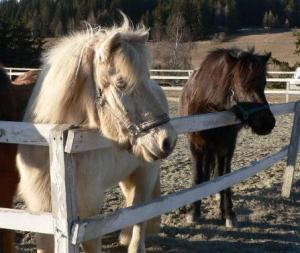 Our partners, Avarkur and Lucca the Icelandics

Last week Edith and I  finally began our work  under the Tu Was project.  After so many set backs, delays and  frustrations, we collected our first little group of four from the Asylum Seekers’ Hostel in our cars. We can get their bus fares paid, but we have to take the money to the Hostel, collect the used tickets and then take them to the Caritas office and get a refund – completely impractical, so for the first few times we’re collecting them and maybe it will sort itself out.

We began with some grooming, just so they could have their first contact in an unthreatening situation.  One girl (the 15-year-old translator) was dabbing delicately at the horse, scared of the dirt and  hurting it.  Two other kids cleaned just the tummy, keeping away from the head, but they all quickly relaxed and got into it.  Unlike most situations, we know nothing about these people except they have been through some sort of trauma to be there. We cannot talk to some of them as their German is limited and we rely on one of the group translating.  They are mostly children and mothers with a few teenagers, I would be a bit worried with younger men, but I don’t think they would come. Asylum seekers have such a negative press these days, but I hope I’m seeing them just as people to help, faith and culture are irrelevant.

All became accustomed to the horses, so we lead them over to the school, freed the horses and asked them to collect a horse and bring it to us.  We did make the mistake of giving them the headcollars, we should have let them choose how to do it – well it was our first official session too!

The small girl got quite upset as the horse repeatedly walked away from her, then when she came over to us, he followed her.  I asked her what had happened, and after trying so hard not to prompt her in my bad German, she realised she had achieved her goal, having brought us a horse and was thrilled.  The boy was more concerned with working out how the halter fitted, but eventually to his joy made it.  Grandma helped our translator and after doing  the task herself.  She was  talking to the horse and I saw her smile and surreptitiously give the horse a kiss on the nose!  She was adamant she has never worked much with animals, but I would say her body language belies this – but maybe it was only donkeys!   The translator also achieved with some help from Grandma, and was so pleased she wanted to do everything including  riding back to the Hostel!

We did a leading exercise with cones, but our younger horse read too accurately the boy’s body language and ran away as he was asking her to trot, so we had a break.  After that we did Life’s little obstacle, where one horse quite happily walked over the pole while they were trying to get the other over and they missed it.  They couldn’t keep quiet, but achieved it easily.  We then took the horses away as they were both becoming a bit uptight, it was their first full session too!   The group was so excited, it was so much fun, the only negative aspect was the formerly full of confidence girl  lost it around the horses.   They all signed up for next time, lets hope they will come. Coming with nothing, we’re also having to find some of them  shoes and jeans, to protect them a bit.  We will also never know if they’ll be suddenly moved on, and so have to treat each session as an entirety.

Under their situation in the Hostel and language difficulties, several of those who said they’d come to the first session didn’t, Doctors appointments, something to do, or maybe just fear held them back.  Hopefully the experiences of our first group would encourage the others.  I would so like to find out their stories but as yet feel unable to ask.  Next time, we’ll repeat the haltering with any new guys, then try to get them to find a metaphor the in obstacle for their lives, or we’ll suggest one and try to go a little deeper.